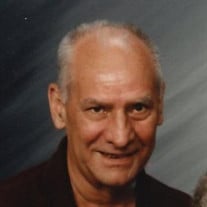 MAYBEE – Melvin Lee Pepple, 86, formerly of Adrian, died Tuesday afternoon, August 3, 2021 at his home in Maybee, Michigan with his loving family by his side and under the care of ProMedica Hospice, Monroe. Born on March 9, 1935 in Mt. Pleasant, Michigan, he was the son of Clyde and Sarah Agnes (Day) Pepple. On February 10, 1967 Melvin married Charlene Sowers in Tecumseh and they were blessed with over 47 years together prior to her death in January 2015. Melvin was employed as a machine operator at Tecumseh Products for over 38 years, until his retirement in 1991. Following his retirement, he loved to volunteer his time, talents, and efforts with the residents at Lenawee Medical Care Facility in Adrian. Melvin was an active member of the Trinity Baptist Church. In his spare time, Melvin enjoyed a good Detroit Tigers game, The Game Show Network, bowling, going to flea markets and antiquing, and country western music. The thing he valued most in life was his relationship with his family and church family. Melvin is survived by his five children, JoAnn (Alston) Minor, Cynthia (Tom) Elder, Raymond Lee Pepple, Rachel Cordle (Keith Zieske), and Leslie (Steve) Snow; ten grandchildren, Jessica (Greg) Robertson, Jason (Kelly) Elder, Rob (Danielle) Elder, Sandy Elder, Samantha Elder, Kyle Smith, John Cordle, Lance Wood, Nicole Wood, and Zachary Pepple; five great-grandchildren, Jacob Elder, Drew Elder, William Elder, Warrick Elder, and Lindsey Smith; sister Naomi (Arthur) Johnson; and sister-in-law, Patricia King. In addition to his parents, and beloved wife, Charlene, he was preceded in death by four brothers and three sisters. Funeral services for Melvin will be held on Monday, August 9, 2021 at 11:00 a.m. at Wagley Funeral Home, Adrian with Pastor Joseph Tatsak officiating. Burial will follow at Lenawee Hills Memorial Park in Adrian. Visitation for Melvin will take place on Sunday from 1:00 to 4:00 p.m. at the funeral home. Melvin’s family wishes to thank ProMedica Hospice, Monroe and Com-For-Care for their loving and compassionate care. They suggest that memorial contributions in Melvin’s name be made to ProMedica Hospice, Com-For-Care, or Trinity Baptist Church. Online condolences and memories may be shared at www.WagleyFuneralHomes.com.

MAYBEE &#8211; Melvin Lee Pepple, 86, formerly of Adrian, died Tuesday afternoon, August 3, 2021 at his home in Maybee, Michigan with his loving family by his side and under the care of ProMedica Hospice, Monroe. Born on March 9, 1935 in Mt.... View Obituary & Service Information

The family of Melvin Lee Pepple created this Life Tributes page to make it easy to share your memories.

Send flowers to the Pepple family.