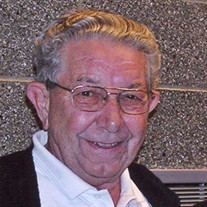 ADRIAN- Melvin C. Dye, age 88 of Adrian, passed away on April 6, 2019, at his home surrounded by his family. He was born March 9, 1931, to Roscoe W. Dye and Sarah Irene (Comstock) Dye, in Rollin Township. He lived with his grandparents until 1938, in Jasper. With his mother, working as a domestic, Melvin went to Tecumseh, Deerfield, Beaverton, Gladwin and Petoskey. In 1942, Melvin moved to Adrian, remaining there for the rest of his life. He graduated from Adrian High School in 1949, with a perfect attendance record. He attended Adrian College from 1949-1950. On August 20, 1950, Melvin married Bertine L. Peavey in Christ Episcopal Church in Adrian. Bertine preceded him in death August 28, 1999. Surviving are three children, Mary Louise (Randy) Zwack, Paul M. (Michelle) Dye and Suzanne M. (Frank) Macher. He was the grandfather of Matthew P. Dye, Elisabeth A. Dye, Nathan A. (Jennifer) Dye, Thomas H.C. Macher, Brenna M.N. Macher, Michael J.E. Macher and Arlesta M. Roderick; five great grandchildren, along with his special friend, Joyce Patterson and honorary daughter, Kim Welke. Melvin was in the U.S. Army serving in Korea and Thailand, and joined the Michigan Army Guard after returning from active duty. He served as Company Commander of Company B, 156 Signal Battalion in Adrian. Melvin went on to the battalion staff and became Battalion Commander. He completed his military career at the State Headquarters in Lansing with 30 years of service. In the military he graduated from the Infantry Officers School, Signal Officers Career Course, Command and General Staff College, and the Industrial College of the Armed Forces-National Security Management Course. Melvin worked for Faraday Electric, Stubnitz-Greene Spring, and as a Sales Service Supervisor for Bridgeport Brass in Adrian. He was recalled to active military duty in 1961. Upon returning, he purchased and operated Adrian Insulators until 1984; from there he worked at Carter Lumber retiring as the Assistant Manager in 1993. He was a member of the Christ Episcopal Church and was active in church affairs. Melvin was a charter member and life member of the Lenawee County Association of Home Builders, a charter and life member of the G. Chandler Bond Post 275 American Legion, and was an avid supporter of the post’s baseball program. Melvin was a long time member of the advisory committee of the Vocational Technical Center of the LISD building trades program, as well as the City of Adrian Human Relations Commission and Planning Commission. He was a life member of the Retired Officers Association of the United States, of the National Guard Association of Michigan and the Retired Officers Association of the Michigan National Guard. He was also a member of Voiture Locale 997 Lenawee County 40/8. Melvin had also been a member of the Adrian Kiwanis Club and Elks, and an advisor and board member of the Junior Achievement. Funeral services will be held on Monday, April 15, 2019, at 10 a.m. at Wagley Funeral Home, Adrian. Burial will follow at Lenawee Hills Memorial Park. Visitation will take place at the funeral home on Saturday, April 13 from 2-8 p.m. and again on Sunday, April 14 from 1-5 p.m. In lieu of flowers, family asks that donations be made to Hospice of Lenawee or Christ Episcopal Church. Online condolences and memories may be shared at www.wagleyfuneralhomes.com.

ADRIAN- Melvin C. Dye, age 88 of Adrian, passed away on April 6, 2019, at his home surrounded by his family. He was born March 9, 1931, to Roscoe W. Dye and Sarah Irene (Comstock) Dye, in Rollin Township. He lived with his grandparents until... View Obituary & Service Information

The family of Melvin Comstock Dye created this Life Tributes page to make it easy to share your memories.

Send flowers to the Dye family.