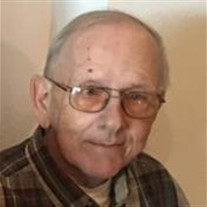 BLISSFIELD— Melvin L. Baird, 76, lifelong resident of Blissfield, died early Saturday morning, February 15, 2020, at the Hospice of Lenawee Home in Adrian. He was born March 17, 1943, in Blissfield to the late Chester and Maye (Cass) Baird. Melvin was a 1961 graduate of Blissfield High School and was a self-employed printer most of his life. He owned M.L. Baird Printing in Blissfield, as well as Print & Go and Printing Connection in Adrian, until his retirement. One of Melvin’s favorite pastimes was deer hunting. He also enjoyed fishing, boating and playing cards. He was an incredible bowler and won many tournaments. He especially enjoyed attending his children’s sporting events. If there was only one person in the stands cheering for the children, it was Melvin. Melvin was a former member of the Blissfield Kiwanis and the Tecumseh Jaycees. On June 24, 1967, Melvin married Janice Forche at St. Alphonsus Church in Deerfield. Together they shared over 52 years of marriage together. Surviving in addition to his wife, Janice, are his children, Michael Baird of Blissfield, Christopher (Michelle) Baird of Commerce Township, MI, Heather (David) Ankenbruck of Fort Wayne, IN, and Jason Baird (Janelle Ammerman) of Blissfield; eight grandchildren, Abigail, Adam and Ashley Baird, Aubrey, Delaney, Haley and Macey Ankenbruck, and Evelyn Baird; his mother-in-law, Florine Forche; and many extended family members. Melvin was preceded in death by his parents; a sister, Shirley Reiner; his father-in-law, Carl Forche; and brothers-in-law, Lonnie Branscum and Eric LaVoy. A funeral service will take place on Thursday, February 20, 2020 at 1:00 p.m. at Wagley Funeral Home, Tagsold Chapel, Blissfield. Burial will follow at Pleasant View Cemetery. Visitation will be held on Wednesday, February 19, 2020 from 4:00 – 7:00 p.m. at the Funeral Home. Memorial contributions to honor Melvin are suggested to Hospice of Lenawee. Online condolences and memories may be shared at www.WagleyFuneralHomes.com.

The family of Melvin L. Baird created this Life Tributes page to make it easy to share your memories.

Send flowers to the Baird family.