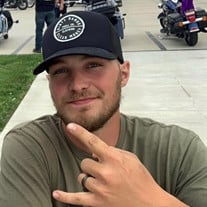 YUTAN, NEBRASKA- Matthew Dean Thompson was born on April 29, 1998 in Adrian, Michigan to Dean and Catherine (Baumgartner) Thompson. He grew up in Adrian, where he attended school until moving to Tecumseh, Michigan, graduating from Tecumseh High School in 2017. As a young boy, Matt enjoyed hunting, skateboarding, BMX and playing soccer and basketball. Matt married Kaylee Samson on September 12, 2020 in Shelby, Iowa and they have made their home in Yutan, Nebraska. Matt has worked at construction, demolition and roofing. He continued his love of hunting and had a great passion for riding his Harley. Matt was a selfless, compassionate, courageous man with a heart of gold. He was an avid Michigan State fan. Matt enjoyed cooking on his smoker, a cold Busch light and dinner out at Buck’s. Matt passed away on March 9, 2022 as a result of a work accident in Omaha, Nebraska at the age of 23 years, 10 months and 9 days. He was preceded in death by his great grandparents and his close friends Reice and Curtis. Matt is survived by his wife, Kaylee Thompson; Mother, Catherine (Edwin) Muck of Papillion; Father, Dean (Lori) Thompson of Adrian, MI; Brothers Andrew (Kortnee) Thompson of Omaha, David (Mackenzie) Thompson of Omaha, Austin Partridge of Adrian, MI and Kooper Popejoy of Papillion, grandparents, Jeff and Claudia LaBarr of Omaha, Chuck and Carol Harsh of Adrian, MI, Richard Thompson of Clayton, MI and David and Penney Baumgartner of Easley, SC; in-laws, Michael and Jeanna Samson of Omaha; brother-in-law, Tyler Samson of Omaha; special nieces and nephews; several aunts, uncles and cousins; and his beloved dog, Nova. A celebration of life will be held on Saturday, March 19, 2022 at 3 p.m. at Wagley Funeral Home in Adrian, with Pastor Steven Palmer officiating. Memorial visitation will take place from 1 p.m. until the start of the service. In lieu of flowers, memorial contributions may be to BACA (Bikers Against Child Abuse) Eastern Nebraska Chapter P.O. Box 6275 Omaha, NE 68106 or to Matt’s family. Online condolences and memories may be shared at www.WagleyFuneralHomes.com.

YUTAN, NEBRASKA- Matthew Dean Thompson was born on April 29, 1998 in Adrian, Michigan to Dean and Catherine (Baumgartner) Thompson. He grew up in Adrian, where he attended school until moving to Tecumseh, Michigan, graduating from Tecumseh High... View Obituary & Service Information

The family of Matthew Dean Thompson created this Life Tributes page to make it easy to share your memories.