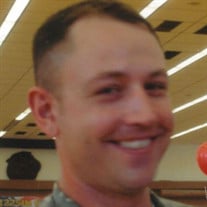 ADRIAN- Matthew Paul Dye entered his Lord’s house on August 12, 2021, after a long, hard fought battle with renal failure. Matthew was born on December 8, 1979, to Paul Dye and Nancy “Mamacita” Van Horn and lived in Adrian most of his life. Matt enjoyed baseball, hockey, soccer and hanging out with his many friends. Matt attended Adrian High School and after graduating in 1998, moved to California for work for two years. Upon his return to Michigan, Matt volunteered with the Raisin Charter Township Fire Department for two years with his father and worked at Inergy/Plastics Omnium. Matthew enlisted in the Michigan Army National Guard on April 24, 2008 and was deployed to Afghanistan reaching the rank of Sergeant. During Matt’s time in the Army National Guard, he received several awards including Army Good Conduct, North Atlantic Treaty Organization Medal, Certificate of Appreciation from Task Force Light Guard and the Army Achievement Medal. Upon Matt’s return, he worked at Condat in Saline before he experienced a tragic automobile accident that left him with a traumatic brain injury. Matt’s love, humor, wisdom and his appreciation for the movie “Goonies”, will live on in the hearts of those he touched forever. Matthew is survived by and will be missed dearly by his mother, Nancy Van Horn; father, Paul (Michelle Roderick) Dye; his two beautiful children, Macy and Jaxton Dye; sisters, Elisabeth Dye and Arlesta Roderick; favorite brother, Nathan (Jennifer) Dye; beloved nieces, Hannah Kapnick and Roslyn Dye; nephew, Leeland Sommers; and last but not least, his four-legged best buddies, Dutch and Mickey. Matthew will be reunited in heaven with his grandparents Melvin and Bertine Dye, Virginia Van Horn and his cousin, Joel Dudley. Funeral services will be held on Thursday, August 19, 2021 at 11 a.m. at Wagley Funeral Home, in Adrian with Pastor Christy Shaw officiating. Burial will follow at Lenawee Hills Memorial Park with military honors being conducted by the American Legion Post #275 in conjunction with the Army National Guard. Visitation for Matthew will be on Wednesday, August 18, 2021 from 2 to 8 p.m. at the funeral home and on Thursday, starting at 9 a.m. until the time of the service. Contributions may be made in memory of Sgt. Matthew P. Dye to the Disabled American Veterans, Lenawee Chapter #20 in Adrian, Michigan. 141 East Albert St. Adrian MI. Online condolences and memories may be shared at www.WagleyFuneralHomes.com.

The family of Matthew Paul Dye created this Life Tributes page to make it easy to share your memories.

Send flowers to the Dye family.