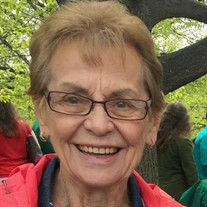 ADRIAN- Mary Lou Balasz, age 89, of Adrian, Michigan passed away peacefully, surrounded by her family, Sunday, August 9th, 2020 after a brief illness. Mary Lou was born in Crystal Falls, Michigan to Reginald and Elsie Shogren on June 25th, 1931. Mary Lou graduated from Bessemer High School in 1949. She was an avid Speedboys cheerleader during her years at the school. After high school Mary Lou joined four other Upper Peninsula young women as they enrolled in a three-year nursing program at Augustana Lutheran Hospital in Chicago, Illinois. Mary Lou treasured her nursing school years and stayed in contact with classmates the rest of her life. On June 6th, 1953, Mary Lou married her high school sweetheart, Eddy Balasz, after she finished nursing school and he returned from the Navy. They settled into married housing at Michigan State University as Eddy completed his degree on the G.I. Bill. After a brief stint back to the U.P., Eddy started work for AT&T. Mary Lou and Eddy, along with daughter Jody, headed out to move to Massachusetts, Minnesota, Colorado and Chicago. Mary Lou gamely moved to each new city making friends at every stop. She also added son Jay in Massachusetts and son Jerry in Minnesota. After moving around the country, Eddy and Mary Lou and their three children were ready to settle down. They moved to Adrian Michigan in 1968 where Eddy took a computer job with the Intermediate School District and Mary Lou resumed work as a nurse. Mary Lou eventually settled into working for Drs. Keener, DeMotts, Schultz and Lentz at their family practice office. Mary Lou continued working for the office for over three decades. Her work at the office introduced her to many families in the Adrian area. Eddy and Mary Lou enjoyed golf and everything Michigan State. They golfed together and in separate leagues, at Woodlawn golf course. For many years they held MSU football season tickets, spending many a fall Saturday tailgating with fellow Spartans. When Mary Lou retired, she spent her time with her Christ the Redeemer Lutheran Church family, quilting friends and bridge partners. She also enjoyed being an usher at the Croswell Opera house in downtown Adrian. To know Mary Lou, was to know her love for her children and grandchildren. She earned the coveted title of Nonnie with the birth of her first grandchild Sam in 1990. She went on to enjoy Eric, Jane, Sarah, Grace and Jack. Each one of her grandchildren enjoyed a deep relationship with both their Nonnie and Papa (Eddy). Mary Lou was preceded in death by her parents, husband Eddy and many relatives and dear friends. She will be deeply missed by her daughter Jody Sydow and her son Eric Sydow, son Jay (Kris) and children Sam (Jade), Jane and Grace, and son Jerry and children Sarah and Jack. A private memorial celebration for Mary Lou will take place on Saturday, August 15th, 2020 at 1 p.m. at Wagley Funeral home with Pastor Denise Benjamin officiating. A live streaming of the service will be accessible from Mary Lou’s tribute wall on www. WagleyFuneralHomes.com where a link to view the recording will be available for 90 days. In lieu of flowers, memorial contributions can be made in Mary Lou’s name to Christ the Redeemer Lutheran Church or Hospice of Lenawee County. Online condolences and memories can be shared at www.WagleyFuneralHomes.com.

The family of Mary Lou Nancy Balasz created this Life Tributes page to make it easy to share your memories.

Send flowers to the Balasz family.