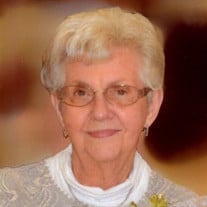 ADRIAN- Mary “Colleen” (Retan) Fox Laser, 85 of Adrian, passed away Thursday, June 27, 2019, at the Hospice of Lenawee Home surrounded by her loving family. Colleen was born on February 24, 1934 to Harold C. and Choice A. (Brock) Retan in Fairfield, MI. Colleen grew up in the Jasper and Sand Creek area with her three brothers On July 2, 1949, she married Frank J. Fox and together they had seven children. After Frank’s passing in 1997, Colleen married Howard Laser on July 23, 1999, and expanded her family by three step children. She was a loving mother, grandmother, great grandmother, friend and role model who will be deeply missed. She dedicated many years to caring for her mother. A devoted homemaker, she enjoyed sewing clothes for her daughters, antiquing, playing board games with friends, volunteering in the church nursery for many years, and traveling the United States. Colleen was also an avid quilter. She enjoyed many years at the family cabin in Moorestown, MI as well as time in Winter Haven, FL during her later years. Colleen also was a real estate agent for Whatley Realty for several years. In addition to Howard, her husband of almost 20 years, she is survived by her children, Cheryl (James) Henry of Britton, Charlene (Patrick) Murphy of Ormond Beach, FL, Christine (Joseph Montalvo) Maldonado of Adrian, Cynthia (Dean) Richard of Jasper, Charlotte (Rudolfo, Jr.) Rodriquez of Fremont, IN, Charles (Patricia) Fox of Dearborn and Chad (Kendra) Fox of Tecumseh; step-children, Patricia (Robert) McQueary of Hopewell, NJ, Mark (Jessica) Laser of Perrysburg, OH, and Amy (James) Molloy of Newport Beach, CA; 24 grandchildren, 20 great grandchildren, 13 step grandchildren, 2 step great grandchildren; sisters-in-law Barbara, Jane and Deb Retan, and Sharon (Bill) Smith, and a brother-in-law Roger (Cindy) Brock. Colleen was preceded in death by her parents, her first husband, Frank Fox, brothers, Jack, Lavon and Eugene Retan; and son-in-law Pedro Maldonado, Jr., and a sister-in-law, Judith Retan. The family would like to thank the staff of Hospice of Lenawee for their loving care of Colleen. A Celebration of Colleen’s Life will be held on Tuesday, July 2, 2019 at 11 a.m. at Wagley Funeral Home with Dr. David Fulks, Jr. officiating. Burial will follow at Fairfield Cemetery. Visitation will take place on Monday, July 1, 2019, from 2 to 8 p.m. at the funeral home. In lieu of flowers, the family ask that donations be made to Hospice of Lenawee, and in Colleen’s memory, please give someone a hug and/or a kind word. Online condolences and memories may be shared at www.WagleyFuneralHomes.com.

The family of Mary "Colleen" Fox Laser created this Life Tributes page to make it easy to share your memories.