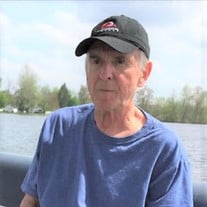 OSSEO, MI – Martin R. Kraimer, 80, of Osseo died on Monday, January 31, 2022 at Promedica Charles & Virginia Hickman Hospital with his family by his side. Marty was a Christmas baby, born on December 25, 1941, in Gross Pointe Woods, Michigan to Martin and Blanche (Godderis) Kraimer. He graduated from St. Austin Catholic Prep School and went on to obtain his bachelor’s degree from the University of Dayton. While at Dayton, Marty played goalie for the hockey team. Continuing his education, Marty earned a master’s degree from the University of Michigan, where he was a teaching fellow in calculus, and a master’s degree from the Illinois Institute of Technology in Chicago, IL. Marty was a computer scientist and worked at the Argonne National Laboratory in Illinois for over 30 years. He also consulted with international laboratories in Russia, China, Germany, India, Australia and South Korea. Marty was the recipient of the Lifetime Achievement Award presented by the ICALEPCS International Scientific Advisory Committee. On May 8, 1965 Marty married Irma Lopez in Milan, MI and they have been blessed with over 56 years together of raising a family and creating memories. Marty always liked to be active and on the go as demonstrated by walking to and from work, five miles round trip, for over 30 years. He ran the Chicago Marathon for 10 years and had a lifetime best of 2:42, qualifying him for the Boston Marathon. Irma and their kids were always there to cheer Marty on, no matter what life adventure they were on. In addition to his wife, Irma, Marty is survived by his children, Brett (Christina) Kraimer of Maryland and Dr. Maria (Dr. Scott Seibert) Kraimer of New Jersey; grandsons, Nicholaus and Matthew Kraimer of Maryland; sisters, Joann Rivard and Chrissy Saenz; and special friends, Salvador (Hermina) Torres, Dave Whaley and John Ripeck. He was preceded in death by his parents. Following Marty’s wishes, cremation will take place with no services at this time. Arrangements have been entrusted to Wagley Funeral Home in Adrian, where online condolences and memories may be shared at www.WagleyFuneralHomes.com.

OSSEO, MI &#8211; Martin R. Kraimer, 80, of Osseo died on Monday, January 31, 2022 at Promedica Charles & Virginia Hickman Hospital with his family by his side. Marty was a Christmas baby, born on December 25, 1941, in Gross Pointe Woods, Michigan... View Obituary & Service Information

The family of Martin R. Kraimer created this Life Tributes page to make it easy to share your memories.

Send flowers to the Kraimer family.