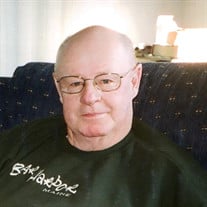 BLISSFIELD – Marshall W. Shirley, 76, departed this life on Tuesday, February 19, 2019 at Blissfield Place. Marshall was born in Plymouth, MI on September 9, 1942 to D. Marshall and Alberta (Virden) Shirley. The family moved to Deerfield about a year later. He attended Deerfield Public Schools and graduated in 1960. He was a dedicated student and had perfect attendance for most of his schooling. Marshall attended MSU for one year before joining the US Air Force in 1962. Following his discharge, he attended the University of Toledo. Marshall married Linda Kay Sell on April 10, 1965, and she survives. They have three children, Mark (Pauline) Shirley of Albion, Laura (Doug) Thomas of Pinckney, and Matthew (Kristine) of Grapevine, TX. Their six grandchildren are Jacob and Rachael Shirley, Gavin and Claire Thomas, and James and Andrew Shirley. He is also survived by his siblings, Joan Roe of Winter Haven, FL and Kathy (Mark) McNicol of Adrian, and many nieces, nephews and cousins. He was preceded in death by his grandparents, parents, sister, Beverly Bradford, and brother, Donald Shirley. Marshall loved his family, classic cars, golf, dirt bike motorcycles, traveling and western square dancing. He attended cruise-ins, car shows, conventions, and swap meets where he could “talk cars” for hours. He played golf in Michigan, Florida, and on trips. Marshall and Linda danced locally and at national square dance conventions across the country. Marshall and his dear friend, Tom Hamilton, rode “dirt bikes” in the Northern Michigan woods several times every summer for years. Trips to several foreign countries and 48 states was another source of happy memories. In 2015 Marshall took Linda to Newfoundland, Canada to visit the site of the Air Force radar station where he spent most of the first year they were married. Marshall worked for Consumers Power Company for over 40 years as a Design Engineer. He drew the plans for line extensions, and subdivision power distribution, as well as many other things. Funeral services will take place on Friday, February 22, 2019 at 11:00 am at the Blissfield First United Methodist Church. Military honors will be conducted by Blissfield American Legion Post 325. Per Marshall’s request, cremation will follow. Visitation will be held at Wagley Funeral Home, Tagsold Chapel, Blissfield on Thursday from 2 to 4 p.m. and 6 to 8 p.m. and again on Friday at the Blissfield First United Methodist Church from 10 am until the time of the service. The family suggests that memorial contributions be made to Hospice of Lenawee, Blissfield First United Methodist Church, or the American Cancer Society. Online condolences and memories may be shared at www.WagleyFuneralHomes.com.

The family of Marshall W. Shirley created this Life Tributes page to make it easy to share your memories.

Send flowers to the Shirley family.