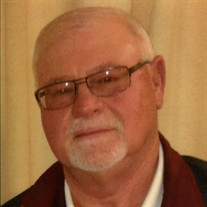 BLISSFIELD – Mark J. Burgermeister, age 65 of Blissfield, passed away Saturday, April 21, 2018, at Toledo Hospital. He was born March 3, 1953, in Adrian, the only son of Edward “Duke” and Verlinda (Ford) Burgermeister. After graduating in 1971 from Blissfield High School, he attended Washtenaw Community College. On March 14, 1987, he married Jeanne Beard in Las Vegas, and she survives. Mark retired from the Lenawee County Road Commission in 2015 with 42 years of service. He served on the Palmyra Fire Department for several years, and was currently in his third term on the Blissfield Village Council. In his younger years Mark played softball and more recently he enjoyed golf, bowling and fishing. Mark was a member of Light of Christ Catholic Parish in Blissfield. The light of his life were his grandchildren and Mark happily attended all of their school and sporting events. Mark will be greatly missed by all of his family and many friends. In addition to Jeanne, his wife of 31 years, he is survived by his children: Kyle (Nicole) Cheney and Heather (Ryan) Walentowski, both of Blissfield, and Steve (Amanda) Burgermeister of Adrian; his father and step-mother, Duke (Carol) Burgermeister of Blissfield; a sister, Sally (David) Fritz of Blissfield; his grandchildren, Jonathan and Hannah Cheney, Landen and Brayden Walentowski, and Kenley and Braxton Burgermeister; and his mother-in-law, Rose Beard of Adrian. He was preceded in death by his mother, Verlinda Burgermeister, and father-in-law, Robert Beard, Sr. Mass of the Christian Burial will take place at 11 a.m., Wednesday, April 25, 2018, at Light of Christ Catholic Parish in Blissfield with Rev. Jeffrey Poll as celebrant. Burial will follow at Pleasant View Cemetery. Visitation will be held at Wagley Funeral Home, Tagsold Chapel in Blissfield on Tuesday from 2 to 8 p.m., with a Rosary Service at 7 p.m.; and again Wednesday at the church from 10 to 10:45 a.m. Contributions in memory of Mark are suggested to Lenawee County Humane Society. Online condolences and memories may be shared at www.WagleyFuneralHomes.com.

The family of Mark J. Burgermeister created this Life Tributes page to make it easy to share your memories.