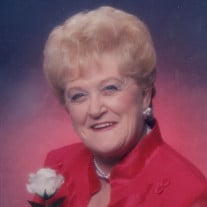 MANITOU BEACH – Marjorie E. Scholl Thompson Cole, age 85, of Manitou Beach, passed away Wednesday, January 23, 2019, at Promedica Bixby Hospital. She was born October 5, 1933 to Wesley and Zelma (Sell) Scholl, and graduated from Blissfield High School. Marjorie married Merlin E. Thompson January 9, 1951, in Lawrenceburg, Indiana, and he preceded her in death in 1986, having shared 35 years together. On August 27, 1989, she married Raynor Cole, and he preceded her in death in 1995. Marjorie was a member of St. Stephen Lutheran Church. She loved people, music and playing the piano. She also enjoyed sewing, gardening, coloring and playing cards. She is survived by her children: Steve (April) Thompson of Onsted, Loralee (Ron) Fenner of Clayton, Jackie (Carmi) McRobert of Adrian, and Jeff Thompson of Manitou Beach; her sisters, Glendora Klump and Rosie Maloney; 9 grandchildren and 11 great grandchildren. In addition to her parents and husbands, she was preceded in death by a son, Thomas Thompson and a sister, Marlene Keller. Funeral services will take place at 1p.m., Monday, January 28, 2019 at St. Stephen Lutheran Church with Pastor Aaron Jensen officiating. Private burial will be at Maple Shade Cemetery in Onsted. Visitation will be held at Wagley Funeral Home on Sunday from 1 to 4 p.m. Contributions in memory of Marjorie are suggested to the American Heart Association. Online condolences and memories may be shared at www.WagleyFuneralHomes.com.

The family of Marjorie E. Scholl Thompson Cole created this Life Tributes page to make it easy to share your memories.