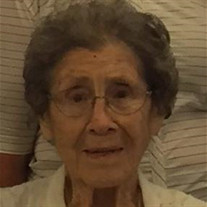 RIGA – Marjorie Gladys DeKeyser, age 94, of Riga, passed away at Brookdale in Adrian under the care of Hospice of Lenawee, on Wednesday, November 22, 2017. She was born July 24, 1923, in Riga, Michigan, to George and Katherine (Reese) Kleindienst and was the youngest of their ten children. She is a 1941 graduate of Blissfield High School. On September 6, 1947, she married Albrick DeKeyser. They shared 41years together before he preceded her in death on February 10, 1989. During their life together they worked as a team on the family farm where they raised tomatoes and sugar beets. She was an active member of St. John’s Evangelical Lutheran Church, in Riga, where she sang in the choir and helped with funeral dinners. Marjorie enjoyed baking for her family, playing cards with the variety club, working in her vegetable garden and wintering in Florida with her husband. Marjorie is survived by five nieces and three nephews. In addition to her husband, Albrick, Marjorie was preceded in death by her parents, brothers, Glenn, Harold, Arnold, Floyd, Norman and LaVern Kleindienst, sisters, Leila Spiegel, Velma Youtzy and Audrey King. The family would like to thank all the staff at Brookdale Assisted Living in Adrian and Hospice of Lenawee for the wonderful love and care they showed Marjorie. Funeral services will be on Wednesday, November 29, 2017 at St. John’s Evangelical Lutheran Church, in Riga, at 11 a.m. with Pastor Justin Shrum officiating. Family will receive friends at the church from 10 a.m. until the time of the service. Burial will follow at Riga cemetery. Contributions in memory of Marjorie may be made to St. John’s Evangelical Lutheran Church or Hospice of Lenawee. Arrangements have been entrusted to Wagley Funeral Home Tagsold Chapel where online condolences may be shared at www.wagleyfuneralhome.com.

RIGA &#8211; Marjorie Gladys DeKeyser, age 94, of Riga, passed away at Brookdale in Adrian under the care of Hospice of Lenawee, on Wednesday, November 22, 2017. She was born July 24, 1923, in Riga, Michigan, to George and Katherine (Reese)... View Obituary & Service Information

The family of Marjorie Gladys DeKeyser created this Life Tributes page to make it easy to share your memories.

Send flowers to the DeKeyser family.