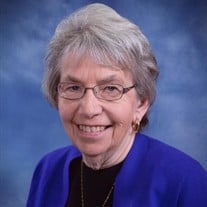 ADRIAN—Marilyn A. Sayler Gossman, age 83 of Adrian, went to her heavenly home Wednesday, May 3, 2017, at Brookdale Assisted Living. She was born February 1, 1934, in Adrian, Michigan, to Walter and Viola (Huebner) Weiss, and graduated from Adrian High School with the Class of 1951. On August 31, 1953, Marilyn married Robert Sayler, and he preceded her in death in 1988 after sharing 35 years together. On May 4, 2002, Marilyn married Gerald Gossman, he also preceded her in death in 2009. Marilyn enjoyed working as a title examiner for Burton Abstract, which eventually became Prestige Title Company, for over 40 years, retiring in 2002. She was a faithful charter member of Hope Lutheran Church and a long-time member of Civitan of Lenawee. Marilyn loved to spend time with her family and especially enjoyed camping with them. Survivors include Marilyn’s children: Marcia Albain, Bruce (Kim) Sayler, Gail Sayler, and Kay (Jim) Logan, all of Adrian, their children: Lisa, Stacy, Crystal, Tasha, Kasie, Elizabeth, Jessica and Lucas; Gerald’s children: Bradley (Michelle) Gossman, Wesley (Charlotte) Gossman, Colleen (Brian) Spiegel, his daughter-in-law, Jan Gossman; their children: Jocelyn, Kellie, Heather, Eric and Ben; and 13 great grandchildren. In addition to her parents and husbands, she was preceded in death by a brother, Richard Weiss, her sister, Janette Wahl and step-son, Dale Gossman. Funeral services for Marilyn will take place at 2:00 p.m., Saturday, May 6, 2017 at Hope Lutheran Church, with Rev. Paul Herter officiating. Burial will follow at St. John’s Lutheran Cemetery. Visitation will be Friday, from 2 to 8 p.m. at Wagley Funeral Home, Adrian. Memorial contributions are suggested to Hope Lutheran Church or Hospice of Lenawee. Online condolences and memories may be shared at www.WagleyFuneralHome.com.

ADRIAN&#8212;Marilyn A. Sayler Gossman, age 83 of Adrian, went to her heavenly home Wednesday, May 3, 2017, at Brookdale Assisted Living. She was born February 1, 1934, in Adrian, Michigan, to Walter and Viola (Huebner) Weiss, and graduated... View Obituary & Service Information

The family of Marilyn A. Sayler Gossman created this Life Tributes page to make it easy to share your memories.

ADRIAN—Marilyn A. Sayler Gossman, age 83 of Adrian, went to her...