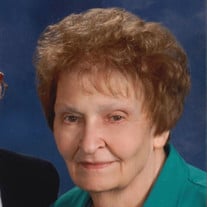 ARCHBOLD – Margaret L. Sutton, 91 of Archbold, formerly Fayette, died late Wednesday night March 10, 2021 at Defiance Area Inpatient Hospice Center with her family by her side. Born September 9, 1929 in Deshler, Ohio, she was the daughter of George L. and Mary E. (Wright) Krohn. Margaret was a lifetime resident of Fulton County. Following high school, Margaret attended Ohio State University where she earned her Bachelor of Science Degree. A true Buckeye! She was a die-hard NCAA football fan, never missing an OSU game. On November 25, 1950 she proudly attended the “Snow Bowl” where Ohio State was “unjustly” defeated by the University of Michigan. Margaret was a teacher for the Evergreen School District for over 28 years, where she taught Home Economics Education. In her retirement, Margaret continued to share her talents of cooking and baking. Lovingly known as the cookie lady, she would travel around her neighborhood in the “Cookie Patrol” (her golfcart); where she was the goodwill ambassador to her friends and neighbors, sharing a cookie and smile wherever she went. A gracious hostess, she loved entertaining in her home, and all were welcome to sign her well known guest book. On October 14, 1951, Margaret married Wendell E. Sutton. They shared almost 65 years of marriage and memories, before he preceded her in death on February 2, 2016. Margaret is survived by her two daughters, Luann Bacon of Archbold and Karen (Milt) Whitmer of Maumee, OH; brother, Richard (Sandra) Krohn of Burnsville, MN; five grandchildren, Tyler (Erica) Bacon, Treasure (Brandon) Sullivan, Rachael (Jimmy) Martin, Rebekah (Daniel) Kostreva, and Gabe (Katelyn) Whitmer; and 12 great-grandchildren. A public graveside service for Margaret will be held at Pleasant View Union Cemetery, 300 S. Walnut Street, Fayette, Ohio on Saturday, March 13, 2021 at 9:00 a.m. with Pastor Jesse Kahler, officiating. A memorial service for Margaret will be private. A live streaming of the service will be accessible from Margaret’s tribute wall on www.WagleyFuneralHomes.com, beginning on Saturday, March 13 at 11:00 a.m. where a link to view the recording will be available for 90 days. In lieu of flowers, the family suggests that memorial contributions to honor Margaret’s memory be made to WLMB - specifically The Share-a-Thon, the Archbold Evangelical Church, and CHP Inpatient Hospice in Defiance. Wagley Funeral Home, Adrian, MI has been entrusted with arrangements, where online memories and condolences may be shared at www.WagleyFuneralHomes.com.

The family of Margaret L. Sutton created this Life Tributes page to make it easy to share your memories.

Send flowers to the Sutton family.