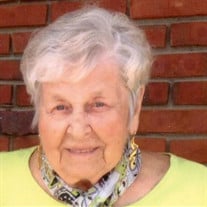 BLISSFIELD - Margaret Ann Poluka, age 92, of Blissfield, passed away at home under the loving care of her family and Hospice of Lenawee on Friday, January 6, 2017. She was born on April 1, 1924, in Scranton, Pennsylvania, to Jacob and Mary (Biletz) Michalko. Margaret was a graduate of Scranton High School. On November 23, 1944, Margaret married Peter Poluka, they enjoyed close to 70 years together before his passing in 2014. Margaret was a home maker and enjoyed spending time with her family. She was a member of St. Peters Catholic Church in Blissfield. In her younger years, she enjoyed golfing and swimming and was a lifeguard. She also enjoyed painting china and is noted for completing many beautiful pieces. Margaret is survived by her children, Donna (Virgil) Diver of Blissfield and Peter (Dianna) Poluka of Deerfield; a grandson, Alan Langmeyer of Deerfield; three step-grandchildren, Chris (Leslie) Diver of Cincinnati, OH, Kevin (Tracy) Diver of Dawsonville, GA, and Kurt (Gina) Diver of Petersburg, MI; and two great-grandchildren, Lucas and Lexi Diver of Petersburg, MI. In addition to her parents and husband, Peter, she was preceded in death by four brothers, Steve, Jake, Andy and Joseph. Cremation has taken place. A Memorial Mass will take place at 11:00 a.m. on Friday, January 13, 2017 at Light of Christ Catholic Parish in Blissfield with Rev. Jeffrey Poll as Celebrant. Burial will follow at Pleasant View Cemetery. A memorial visitation will take place at the church on Friday, from 10:00 am until the time of the service. In lieu of flowers, the family suggests memorial contributions be made to Hospice of Lenawee or The Light of Christ Parish. Arrangements have been entrusted to Wagley Funeral Home, Tagsold Chapel where online condolences and memories may be shared at www.WagleyFuneralHomes.com.

BLISSFIELD - Margaret Ann Poluka, age 92, of Blissfield, passed away at home under the loving care of her family and Hospice of Lenawee on Friday, January 6, 2017. She was born on April 1, 1924, in Scranton, Pennsylvania, to Jacob and Mary (Biletz)... View Obituary & Service Information

The family of Margaret Ann Poluka created this Life Tributes page to make it easy to share your memories.

Send flowers to the Poluka family.