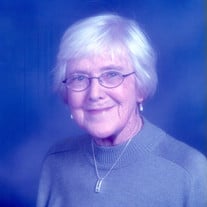 ADRIAN—Margaret Jean Lenhart, age 92, beloved mother of Jillienne (Julie Ann) Bowers and John Hazlehurst, died Thursday, January 2, 2020, at the University of Michigan Hospital in Ann Arbor. Margaret was born January 7, 1927, in West Bromwich, England, the daughter of the late Bert and Ann (Veitch) Mallin. Margaret lived her early life in Great Britain, where she attended Malvern Hall, a private girls school earning her Associate’s Degree. After school, she was employed at Marshall and Snelgrove Clothing. Upon marrying Ronald John Hazlehurst, she moved to Canada in 1953, coming to the United States in 1956, and finally settling in California. She worked as a supervisor for AETNA Insurance Company as well as serving as managers at Imperial and FHP. Margaret moved to Adrian, Michigan in 1993 to be closer to her daughter, Jillienne and her family. She worked for her son-in-law, Bryan at B.R. Bowers and Company well into her 80’s. Margaret was a supporter of the arts, attending many concerts, particularly concerts with the Toledo Symphony Orchestra where her daughter works. Margaret was a faithful member of Gloria Dei Lutheran Church in Long Beach, CA, and later, the First United Methodist Church, in Adrian, where she sang in the choirs. She also was a member of the Red Hat Society. A highlight in Margaret’s life was becoming a U.S. citizen when she was 75 years old. Survivors include a daughter, Jillienne (Bryan) Bowers of Adrian; a son, John Hazlehurst of Crystal Beach, TX; five grandchildren, Marissa, Meghan, Christopher, Colin, and Charles; and three great-grandchildren, Tayden, Olivia, and Nora. She was preceded in death by her parents; husbands, Ronald, Victor Stern and Jacque Lenhart; a son, Peter Hazlehurst; and her sister, Dorothy List. Per Margaret’s wishes, cremation will take place. A memorial service will be held at a later date. Memorial contributions in Margaret’s memory may be made to St. Jude’s Children’s Research Hospital, the Lenawee Humane Society or the Toledo Symphony Orchestra. Online condolences and memories may be shared at www.WagleyFuneralHomes.com.

The family of Margaret J. Lenhart created this Life Tributes page to make it easy to share your memories.

Send flowers to the Lenhart family.