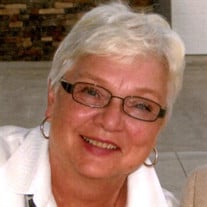 BLISSFIELD – Margaret A. Goble, age 80 of Blissfield, passed away Tuesday, October 23, 2018 at Ebeid Hospice in Sylvania. She was born September 17, 1938, in Adrian, Michigan, the only child of William “Myles” and Frances (Crandall) Webster. Margaret graduated from Blissfield High School in 1956, studied nursing at Capitol University, attended Davis Business College and earned her Bachelor’s Degree from Siena Heights University. Margaret worked in various capacities at Owens Illinois, in the development office at Siena Heights University, for Bay Corrugated Container, and more recently at Blissful Living as well as modeling for Richland Furs many years ago. On June 17, 1961, she married David Goble. In their 38 years of marriage they lived a life filled with friends, fun and adventure. He preceded her in death in 2000. Margaret married Donald Hoffman on December 1, 2001, and he survives. Margaret was a member of the First United Methodist Church, and Blissfield Rotary. She made many friends in her book club, bridge club, bunko group and Red Hat Society. She served on the City Council, Blissfield DDA and the Foundation for Educational Excellence. Margaret also worked on several political campaigns. She treasured time spent with family and friends. In addition to her husband, Donald, she is survived by her children, Eric (Margee) Goble of Sandy Spring, GA and Marcy (Carl) Anderson of Ottawa Lake; Donald’s son, Chip Hoffman of Manitou Beach; grandchildren, Connor and Annie Kate Goble, David and Dylan Anderson and Ariel Hoffman; and a multitude of treasured friends. She was preceded in death by her parents, and first husband, David. Funeral services will take place at 2 p.m., Sunday, October 28, 2018 at Wagley Funeral Home, Tagsold Chapel in Blissfield with Pastor Kristen Coristine and Pastor Robert Hinz officiating. Burial will follow at Pleasant View Cemetery. Visitation will be held at the funeral home Saturday from 2 to 8 p.m. In lieu of flowers, contributions in memory of Margaret may be made to Siena Heights University, University of Michigan Hospital for cancer research or Ebeid Hospice. Online condolences and memories may be shared at www.WagleyFuneralHomes.com.

The family of Margaret A. Goble created this Life Tributes page to make it easy to share your memories.

Send flowers to the Goble family.