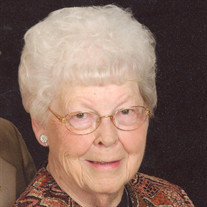 BLISSFIELD — Marcella E. Brieschke, 96, of Blissfield, formerly of Riga, died Sunday evening, February 16, 2020, at Blissfield Place under the compassionate care of Hospice of Lenawee and surrounded by her loving family. She was born October 24, 1923, in Riga to the late Ezra and Minnie (Tagsold) Dauel. Marcella graduated from Blissfield High School in 1941 and attended Siena Heights University. She was an educator for over 10 years in both the McCormick and Riga Village Schools. Marcella was also employed for 19 years at the Riga Branch of the Jipson-Carter Bank, where she began as a Teller. She retired 1986 after serving as Bank Manager her last three years. She had an extensive love of music. Marcella shared her incredible gift of music to many students through lessons in her home. She was an active member of Trinity Lutheran Church in Riga where she succeeded her father as Organist in 1943. She continued to play for the church for over 72 years until she retired in August 2015. In 1992, Marcella organized and directed the “Silvertones Band” for the Bliss-Liewert Senior Center. Her leadership continued for over 17 years, until her retirement in 2009. On February 23, 1946, Marcella married Clyde Filter. He preceded her in death on May 7, 1966. Marcella was married to Erven J. Brieschke on September 7, 1969 and they celebrated over 48 years together before he preceded her in death on June 14, 2018. Marcella is survived by her sister-in-law, Ruth (Wayne) Walters; nephew, Terry (Sheila) Filter; and many more beloved nieces, nephews and cousins. She was preceded in death by her parents; her first husband, Clyde Filter; her second husband, Erven Brieschke; sister, Marian Scott; brother-in-law, Norman Scott; sister-in-law, Mary Ann (Norman) Nichols; and brother-in-law, David Brieschke. A funeral service will take place on Thursday, February 20, 2020 at 10:30 a.m. at Trinity Lutheran Church in Riga with Dianna Raine officiating. Burial will follow at Riga Cemetery. Visitation will be held on Wednesday, February 19, 2020 from 4:00 – 8:00 p.m. at Wagley Funeral Home, Tagsold Chapel, Blissfield. Memorial contributions to honor Marcella are suggested to Trinity Lutheran Church or Hospice of Lenawee. Online condolences and memories may be shared at www.WagleyFuneralHomes.com.

BLISSFIELD &#8212; Marcella E. Brieschke, 96, of Blissfield, formerly of Riga, died Sunday evening, February 16, 2020, at Blissfield Place under the compassionate care of Hospice of Lenawee and surrounded by her loving family. She was born October... View Obituary & Service Information

The family of Marcella E. Brieschke created this Life Tributes page to make it easy to share your memories.

Send flowers to the Brieschke family.