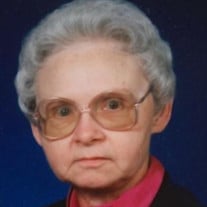 ADRIAN – Major Shirlene Donna Miller age 91, of Adrian, passed away on Wednesday, December 2, 2020, at Brookdale of Adrian, with the love and support of her family and Hospice of Lenawee. She was born on January 27, 1929, in Ypsilanti, Michigan, to Melvin and Edith (Ryder) Muhn. Shirlene graduated from Onsted High School and joined the work force where she worked as a press proofreader. Shirlene married Herman R. Miller on September 27, 1947, in Angola, Indiana, and they shared 63 years together before his death in 2010. Together they raised three daughters, Terry, Beverly and Judith. They dedicated their lives to ministry and serving their community. Serving as an officer for the Salvation Army for many years in Michigan and Indiana, Shirlene used her talents of being highly organized and could plan a program and be ready to serve whenever needed. She was a gifted musician playing the piano and singing; and was a published poet. Her family can vouch that she loved crafts of all kinds and had supplies ready to work on any craft imaginable. She is survived by her daughters, Terry (David) McClintic and Judith Miller; granddaughters, Elizabeth (Ken Munday) and Sarah (Jason) Thiede; step-granddaughter, Amy (David) Brown; three great-granddaughters; four step great-grandchildren and seven step great-great grandchildren; sisters, Rhea Butler, Sharron Clifton and Priscilla Sardo. Shirlene was preceded in death by her parents, husband, Herman; daughter, Beverly Miller; and brother, Richard Muhn. A memorial service for Shirlene will be held on Saturday, July 31, 2021 at The Salvation Army, in Adrian, with Majors William and Elizabeth Cox, and Envoy Margaret Gaster officiating. Contributions in memory of Shirlene may be made to The Salvation Army. Online memories and condolences may be shared at www.WagleyFuneralHomes.com

ADRIAN &#8211; Major Shirlene Donna Miller age 91, of Adrian, passed away on Wednesday, December 2, 2020, at Brookdale of Adrian, with the love and support of her family and Hospice of Lenawee. She was born on January 27, 1929, in Ypsilanti,... View Obituary & Service Information

The family of Major Shirlene Donna Miller created this Life Tributes page to make it easy to share your memories.