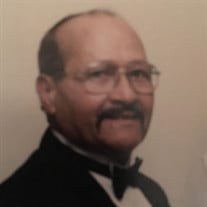 ADRIAN – Luis Santiago, 87, born December 14, 1929 to Estebanilla Santiago and Alejandro Cosme, entered peacefully into rest on March 11, 2017. He was preceded in death by children Luis Alberto, Gloria, Ralph and Carlos Ramos, his mother, Estebanilla, and brothers, Carlos and Jose. Born in Puerto Rico, Luis came to the US in the 1960’s, where he met Dolores Ramos, and helped raise her five children. They had two children together, Alejandro and Rebecca. Luis worked hard to support his family as a meat cutter, security guard at Merillat’s and a cook at Lenawee Country Club. Luis enjoyed gardening, fishing, traveling, and going to auctions. At home he was very handy at repairing small engines. He loved music, dancing and playing the guitar. His favorite shows to watch were westerns, boxing, nature shows and action movies. Luis is survived by wife, Dolores; children, William Santiago of WI, Rebecca (Tim) Strachn of Adrian, Alex Santiago of Grand Rapids, MI, Chris (Lisa) Ramos of PA, Lisa Ramos of TN, and Tom Ramos of CO; as well as several grandchildren living throughout the states and sisters, Virgenmenia Rosario and Delia Santiago. Funeral services will take place at 11:00 a.m., Thursday, March 16, 2017 at Wagley Funeral Home, Adrian. Burial will follow at North Rome Cemetery. Visitation will be held at the funeral home Wednesday from 5:00 to 7:00 p.m. Online condolences and memories may be shared at www.WagleyFuneralHome.com.

The family of Luis Santiago created this Life Tributes page to make it easy to share your memories.

Send flowers to the Santiago family.