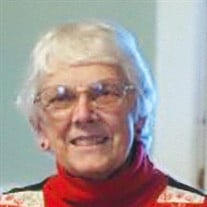 ADRIAN – Lucy May Ives, 85, of Adrian died Friday evening, March 19, 2021 at ProMedica Toledo Hospital. Born in Raisin Township on January 28, 1936, she was the daughter of Leroy Hall and Winifred (Crawford) Comfort. She was a 1953 graduate of Adrian High School and a lifelong resident of Adrian. Lucy worked at Adrian State Bank for over 24 years. On January 31, 1996 she retired from her position as Bank Auditor. She was a faithful member of Tecumseh Assembly of God, where she served in many capacities. A lover of traveling, she and Gilbert were blessed with many trips, where they made many memories over the years. Lucy also enjoyed being outdoors, marveling at nature’s beauty by birdwatching, especially hummingbirds, and she was an avid gardener. Her family brought her the most joy, and she prided herself in attending as many of her grandchildren’s activities as she could. In 1956, Lucy married Ray Orville Poling, Jr. and together they had four children. In 1988, Lucy married Gilbert Ives. He preceded her in death on June 1, 2014. Also preceding her in death were her parents; her two brothers, Charles and George Comfort; and a son-in-law, Gary Burch. Surviving Lucy are four children, Susan Burch (Steve Fankhauser), Nancy (Mark) Bush, Daniel (Jamie) Poling, and Karen (Tim) Hess; four step-children, Brenda (William) Pruet, Jeff (Angela) Ives, Marilyn (Sean) Sullivan, and Gregg Ives; eleven grandchildren; twelve great-grandchildren; six step-grandchildren; eight step-great-grandchildren; four step-great-great-grandchildren; and her companion and best friend, Marvin Horton. Private funeral services will be held Wednesday, March 24, 2021, at the Wagley Funeral Home, Adrian, with Pastor Mitchell Frost officiating. Burial will follow in Raisin Valley Cemetery. A live streaming of the service will be accessible from Lucy’s tribute wall on www.WagleyFuneralHomes.com, beginning at 11:00 a.m. Wednesday, March 24, 2021. A link to view the recording will be available for 90 days. In lieu of flowers, the family suggests memorial donations to honor Lucy be given to Convoy of Hope. Online memories and condolences may be shared at www.WagleyFuneralHomes.com.

ADRIAN &#8211; Lucy May Ives, 85, of Adrian died Friday evening, March 19, 2021 at ProMedica Toledo Hospital. Born in Raisin Township on January 28, 1936, she was the daughter of Leroy Hall and Winifred (Crawford) Comfort. She was a 1953 graduate... View Obituary & Service Information

The family of Lucy May Ives created this Life Tributes page to make it easy to share your memories.

Send flowers to the Ives family.