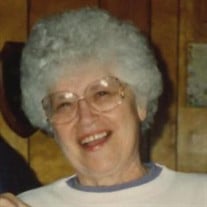 ADRIAN – Lucille May Millet, age 89, of Adrian, died Friday, January 8, 2021, under the care of Hospice of Lenawee at Provincial House in Adrian, where she has resided the past 8 years. She was born January 16, 1931, in Tipton, the youngest child of fourteen born of the late Herman and Anna (Heubner) Luck. Lucille spent her early years on a turkey farm in Tipton, before moving to a farm on Pentecost Highway. Throughout her life she proudly dignified herself as a “farmer’s daughter.” She understood and exemplified the values of hard work and perseverance. On July 29, 1950, Lucille married Angel Luis Millet in Monroe, and he preceded her in death on March 29, 2008. Lucille primarily served as a loving homemaker for her family. She is fondly remembered for her skill at embroidery and for her famous old-fashioned peanut butter and chocolate fudges. Lucille also worked as a clerk at several local clothing stores. She especially enjoyed her tenure at the JC Penney department store in Adrian from 1971-1977. She greatly anticipated annual trips to Sault Ste Marie, MI with Angel and her six children. She was a longtime member of the First Church of the Brethren. Surviving are her children, Allen (Deb) Hatt of Jasper, Angel Millet, Jr., of TN, Deb (Sid) Barrow of Hudson, Cheryl Millet of WA, Marlene (Mike) Diederich of Tecumseh, and Kevin Millet of CA; eight grandchildren; and numerous great-grandchildren, great-great grandchildren, and step-grandchildren. In addition to her parents and husband, she was preceded in death by all thirteen of her siblings. A funeral service for Lucille will be held Wednesday, January 13, 2021, at 2:00 p.m. at the Wagley Funeral Home, Adrian, with Rev. Larry Betz officiating. The family will receive friends for visitation on Wednesday from 1:00 p.m. until the service. She will be laid to rest next to her late husband in Lenawee Hills Memorial Gardens in Tecumseh. Memorial contributions in honor of Lucille are suggested to the Alzheimer’s Association. Following the Governor’s executive order, all attendees are required to wear a proper face covering, with the exception of those under the age of five years old or those who cannot medically tolerate. For those unable to be present, a live streaming of the service will be accessible from Lucille’s tribute wall on www.WagleyFuneralHomes.com, where a link to view the recording will be available for 90 days. Online memories and condolences may be shared at www.WagleyFuneralHomes.com.

ADRIAN &#8211; Lucille May Millet, age 89, of Adrian, died Friday, January 8, 2021, under the care of Hospice of Lenawee at Provincial House in Adrian, where she has resided the past 8 years. She was born January 16, 1931, in Tipton, the youngest... View Obituary & Service Information

The family of Lucille May Millet created this Life Tributes page to make it easy to share your memories.

Send flowers to the Millet family.