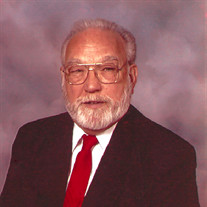 RIGA- Lowell Behm Crockett, age 86 of Riga, passed away on Thursday, March 21, 2019, at the Hospice of Lenawee Home surrounded by his family. He was born on June 30, 1932, in Riga, to John and Catherine (Behm) Crockett in the family home. Lowell graduated from Blissfield High School and entered the work force of manufacturing. A Korean War Era Veteran, he worked at Blissfield Canning Factory and Revco until he was drafted into the Army. Noted for his impeccable performance, his employers held his position until his return from Japan where he had been stationed. Upon his discharge from the Army, Lowell returned to Revco and worked until 1967, and from there he moved on to UARCO where he stayed until his retirement. Lowell was a “Riga Man” his entire life and was kind and generous to all who knew him. He enjoyed riding motorcycles in his earlier years, and was a collector of both guns and toy cars. Lowell’s family was his greatest treasure and he loved spending time with them and taking part in their lives. He is survived by his son, Jerry Crockett, from his first marriage to Grace Willnow. Jerry has given Lowell three grandchildren, Karen, John and Jack; and several great- grandchildren. After Grace’s passing, Lowell was fortunate to meet Sophie Helene Dobrisek. When Helene and Lowell married in 1995, he gained another family of step-sons and daughters-in-law, Kevon (Karrie) Martis and Eric (Paula) Martis; grandchildren, Courtney (Brandon), Noah, Garrett and Adam Martis; and three great-grandchildren. Lowell was preceded in death by his parents, sister, Colleen Crockett and wives, Grace and Helene. Funeral services for Lowell will be on Monday, March 25, 2019, at 10:00 a.m. at Wagley Funeral Home Tagsold Chapel, Blissfield with Deacon Wayne Charlton officiating. Burial will follow at Riga Cemetery where military honors will be conducted by Blissfield American Legion Post 325. Visitation will be on Sunday, March 24, 2019, from 4 p.m. to 6 p.m. at the funeral home and again on Monday from 9:00 a.m. until the time of the service. Contributions in memory of Lowell may be made to Hospice of Lenawee or St. Jude Children’s Research Hospital. Online condolences and memories may be shared at www.wagleyfuneralhomes.com.

RIGA- Lowell Behm Crockett, age 86 of Riga, passed away on Thursday, March 21, 2019, at the Hospice of Lenawee Home surrounded by his family. He was born on June 30, 1932, in Riga, to John and Catherine (Behm) Crockett in the family home.... View Obituary & Service Information

The family of Lowell Behm Crockett created this Life Tributes page to make it easy to share your memories.

Send flowers to the Crockett family.