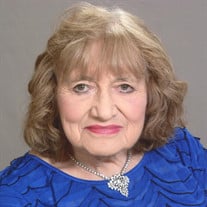 BROOKLYN - Loretta Coberley, age 85 of Brooklyn, Michigan passed away peacefully near family on Tuesday, January 29, 2019 at a daughter’s home. Loretta was born on September 10, 1933 in Toledo, Ohio to Earl and Virginia (Cote) Rang. She attended Blessed Sacrament School, Central Catholic High, and graduated from Whitmer High School in 1951. Loretta married LeRoy Coberley on September 13, 1952 at St. Clement’s Church in Toledo. Together, they built a home in Toledo and in April 1956 bought and moved to the farm near Onsted. Loretta was a faithful member of St. Joseph’s Shrine in the Irish Hills since 1956 and a member of its Altar Rosary Society. She served as a 4-H Leader for many years, associated with Onsted Sweet Clovers since 1967, project leader since 1979, and advisor for some years including Lenawee County 4-H Service Club, Lenawee County Fair 4-H Crafts Superintendent, and Onsted High Riders horse project. Among her many interests, Loretta was an accomplished seamstress, loved horses, cooking, and enjoyed attending her children and grandchildren’s functions. Loretta was a self-employed Sales Representative for Stanley Home Products and Fuller Brush since 1984. She served on the Athletic Boosters Club of Onsted High School, and was honored with the Special Citation for Exceptional Volunteer, American Red Cross Lenawee Chapter in 1996. She was an advocate for recycling, reusing materials, and led a petition drive to get the four-way stop placed at the corner of Stephenson & Hawkins roads. Loretta will be lovingly remembered by daughters Lisa (Jim) Cyrus, Cathy (Ed) Merritt, Susan (Greg) Holland, Michelle (Mike) McLemore; daughter-in-law Kim Coberley; grandchildren Thomas, Katelyn, Charlotte, Emma, Luke, Jake, Noah, Kayla, Alisa, Megan, Adam, Laura, 10 great-grandchildren, and many loving nieces, nephews and other extended family and friends. In addition to her husband of 63 years and parents, Loretta was predeceased by son Charles, sister JoAnn Moore, and brothers Charles, Richard, and Michael Rang. Loretta’s family will receive friends to celebrate her life at the Wagley Funeral Home in Adrian on Tuesday, February 5th from 1-3pm and 5-8pm. A brief visitation will be held on Wednesday, February 6th from 10am to 11am at St. Joseph Shrine Catholic Church in the Irish Hills. Mass and burial will immediately follow. Contributions in Loretta’s memory may be made to St. Jude’s Hospital and Hospice of Lenawee. Online condolences and memories may be shared at www.WagleyFuneralHomes.com.

The family of Loretta Mae (Rang) Coberley created this Life Tributes page to make it easy to share your memories.

Send flowers to the Coberley family.