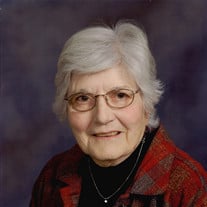 ADRIAN- Lola Belle Frownfelder, age 92 of Adrian, passed away on Tuesday, August 20, 2019, at Charlotte Stephenson Manor. Born on February 18, 1927, in Metamora, OH, she was one of the eight children of Phillip and Matilda (Crouse) Snyder. Lola graduated from Metamora High School and years later enjoyed many reunions with her classmates. She married Thomas F. Frownfelder on April 8, 1950, and they celebrated 42 years together before his passing in September 1992. Lola loved her family and was attentive to all her grandchildren and their activities. She enjoyed knitting and spending time outside gardening and preserving the harvest. Once her children were attending school Lola entered the workplace as secretary/bookkeeper for the First Presbyterian Church of Adrian where she was a member for 67 years. Later working as a bookkeeper for Signpress of Adrian and then United Way of Lenawee. During this time she was a member of the Business and Professional Women’s Association. She is survived by her children, Fredric K. (Cindy) Frownfelder, Cheryl Watkins and Paul Frownfelder; grandchildren, Megan Frownfelder, Terry Frownfelder, Dayna (Nick) Meisch and Paige Watkins and great-grandchild, Elias Meisch. In addition to her parents and husband, Lola was preceded in death by her siblings, Bula Soderberg, Evelyn Soderberg, Myrtle Kinker, Gladys Smoll, David Snyder, Carolyn Snyder and Phyllis Rowe. A memorial service will be held on September 21, 2019, at 1:00 p.m. at Wagley Funeral Home with Pastor Sarah Essenburg-Ross and Pastor Karleen Kinker officiating. Visitation will take place from 11:00 a.m. until the time of the service. Interment will be at Oakwood Cemetery. Those wishing to donate in memory of Lola can give their time and talent to the charity of the donor’s choice. The family wishes to thank the caregivers of Charlotte Stephenson Manor and Hospice of Lenawee. Arrangements have been entrusted to Wagley Funeral Home, Adrian where online condolences and memories may be shared at www.WagleyFuneralHomes.com.

ADRIAN- Lola Belle Frownfelder, age 92 of Adrian, passed away on Tuesday, August 20, 2019, at Charlotte Stephenson Manor. Born on February 18, 1927, in Metamora, OH, she was one of the eight children of Phillip and Matilda (Crouse) Snyder.... View Obituary & Service Information

The family of Lola Belle Frownfelder created this Life Tributes page to make it easy to share your memories.

Send flowers to the Frownfelder family.