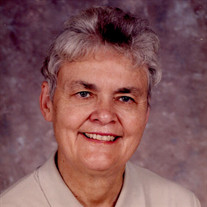 ADRIAN – Lillis A. Gilmartin, age 85 of Adrian, passed away on Monday, February 27, 2017, at her daughter’s home under the care of Hospice of Lenawee. She was born June 12, 1931, in Columbus, Ohio to T. Thomas and Anna (Lester) Wylie. She completed her undergraduate degree at Oberlin College and received a Master of Arts in Education from the University of Michigan. On June 13, 1953, she married Richard Gilmartin in Kalamazoo, Michigan, and they celebrated 63 years together. He preceded her in death on February 15, 2017. Lillis was an adjunct professor at Siena Heights University, taught in the Adrian Public Schools, and gave piano lessons. She also worked as church organist for Immanuel Lutheran Church in Palmyra and the Adrian Episcopal Church for many years. Lillis enjoyed performing in plays at the Croswell Opera House and at Siena Heights. She played violin with the Adrian Symphony Orchestra in its early years and was part of the pit orchestra at the Croswell Opera House. Lillis was a member of the First Presbyterian Church of Adrian. She was also a member of the YMCA, Alpha Omega, Matinee Musical, her book club, and was a former member of 1000 Cranes, the storytellers, and Kappa Kappa Epsilon. Lillis is survived by her children, James Gilmartin of Schaumburg, IL and Amy (Don) Lusk of Brooklyn, MI. In addition to her parents and husband, Richard, she was preceded in death by a brother, Thomas Wylie and a son, Thomas Gilmartin. A memorial service celebrating both Lillis and her husband, Richard, will take place at 4:00 p.m., Saturday, March 4, 2017 at Wagley Funeral Home with Rev. Sarah Ross officiating. Visitation will be held at the funeral home Saturday from 2:00 p.m. until the service. Contributions in memory of Lillis are suggested to Hospice of Lenawee or the First Presbyterian Church of Adrian. Online condolences and memories may be shared at www.WagleyFuneralHome.com.

The family of Lillis A. Gilmartin created this Life Tributes page to make it easy to share your memories.

Send flowers to the Gilmartin family.