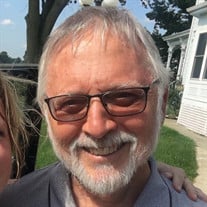 ADRIAN – Lewis B. Sprague, age 70 of Adrian, passed away Wednesday, February 27, 2019 at University of Michigan Hospital. Born March 5, 1948, in Adrian, Michigan, he was the son of Bernard and Esther (Dohm) Sprague. Lew was a 1966 graduate of Adrian High School and earned an Associate’s Degree from what is now Jackson College. He proudly served his country in the United States Navy during the Vietnam War. On May 28, 1994, he married Tommie Oliver Pearcy, and she survives. Lew was a master electrician for Service Electric for 28 years. In his retirement he continued working as an electrical inspector for Cambridge Township, the Village of Blissfield and Riga Township. For several summers, he and Tommie also worked events at Michigan International Speedway. Lew was a member of IBEW Local 8, IAEI, and the Brewster Society as well as a former member of Civitan of Lenawee. He mentored many students at the LISD and also served on their advisory board. Lew shared his love of origami with family, friends and others he taught at the Adrian Senior Center. He and Tommie enjoyed traveling extensively and collecting kaleidoscopes. Lew was devoted to his family and will be greatly missed by those surviving including Tommie, his wife of almost 25 years; children: Tammy McGhee of Macon, GA, Matthew Sprague of Tecumseh, Darci (Terry) Francoeur of Onsted, Kathy (Todd) Brewer of Clayton, Beth (Mike) Bowden of McKinney, TX; a sister, Neva Kinney of Cheyenne, WY; 11 grandchildren; 4 great grandchildren; numerous nieces; 1 nephew and a multitude of friends. At Lew’s request, cremation will take place. A memorial service will take place at 11 a.m., Tuesday, March 5, 2019, at Adrian First Church of the Nazarene with Pastor Michael Wood officiating and military honors conducted by the VFW Annis Fint Post #1584 and American Legion Post #97. Visitation will be held at Wagley Funeral Home in Adrian on Monday from 2 to 8 p.m. Contributions in memory of Lew are suggested to Melanoma Research at University of Michigan Hospital at https://victors.us/lewisbsprague, Lenawee Humane Society or Hope Community Center. Online condolences and memories may be shared at www.WagleyFuneralHomes.com.

The family of Lewis B. Sprague created this Life Tributes page to make it easy to share your memories.

ADRIAN – Lewis B. Sprague, age 70 of Adrian, passed away Wednesday,...

Send flowers to the Sprague family.