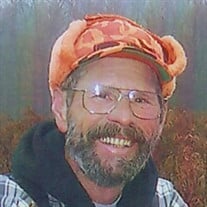 ADRIAN – Lewis J. “Louie” Calvin, 72 of Adrian, died peacefully at home Thursday, August 12, 2021, after a courageous battle with cancer. He was born March 30, 1949, in Adrian, Michigan to Elizabeth (Silberhorn) and the late Richard Calvin. After graduating from Adrian High School in 1967 Lewis proudly served in the United States Navy during the Vietnam War. On April 20, 1975, he married Kathy Hunt and she preceded him in death in 1992. Lewis married Jill Langton-Dunbar August 5, 1993, and she survives. Throughout his life, Louie worked in many different capacities from working on a charter fishing boat in Florida in his younger years to driving truck for L& M and sales and repair at E & B Electronics. Most recently he worked at Adrian College in facility maintenance, retiring with 30 years of service. His many hobbies included woodworking, riding motorcycles, deer hunting, ice fishing, and restoring antique tractors and farm equipment. Louie’s annual harvest party and hayride delighted family and friends for many years. He was an active member of VFW Annis-Fint Post #1584 as well as a member of American Legion Post #97 and the Farmer’s Antique Tractor & Engine Association. In addition to his mother, Elizabeth Calvin Kershner and Jill, his wife of 28 years, he is survived by his children: Lewis (Mandy) Calvin Jr., Trent (Jess) Calvin, Danielle Trejo, and Melissa Dunbar; siblings: Linda (David) Lips, Karen (Doug) Witt, and Richard (Linda) Calvin; six grandchildren and 2 great grandchildren. Besides his father and first wife, he was preceded in death by brothers James, Larry, and Gary Calvin, and a sister, Nancy, in infancy. A celebration of Louie’s life will take place at 1 p.m., Tuesday, August 17, 2021, at the American Legion Post #97 in Adrian with military honors conducted by the American Legion Post #97 and the VFW Annis Fint Post #1584. Memorial contributions are suggested to the American Cancer Society, American Legion Post #97 or VFW Annis Fint Post #1584. Arrangements have been entrusted to Wagley Funeral Home where online condolences and memories may be shared at www.WagleyFuneralHomes.com.

The family of Lewis J. "Louie" Calvin created this Life Tributes page to make it easy to share your memories.

Send flowers to the Calvin family.