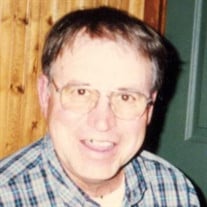 BLISSFIELD—Lewis J. (“Lewie”) Beagle, 78, of Blissfield, passed away on Tuesday, March 31, 2020 at Ebeid Hospice Center in Sylvania, OH. He was born at Bixby Hospital in Adrian, MI on August 15, 1941 to Daniel C. and Lucille (Demusky) Beagle. He graduated from Blissfield High School in 1959 and began his life long career as a farmer in Riga and Ogden Townships. On June 22, 1963, he married Judy Robertson, who survives. He is also survived by his son, Mike (Regina) Beagle of Blissfield and daughter, Cheryl Mahoney of Fenton, MI; four grandchildren, Phil Mahoney and Luke, Noah and Leah Beagle; brother, Richard (Deborah) Beagle, and sister, Germaine (Fred) Binns both of Blissfield. In addition to his parents, he was preceded in death by brothers, Daniel E. Beagle and Raymond Beagle, and sister, Alma Page. Lewie enjoyed playing his accordion, driving his Gator, camping, playing with his grandchildren, and relaxing by his farm pond. He was a member of St. John’s Evangelical Lutheran Church in Riga. Due to the current isolation policies, there will be a private committal service. A memorial service will be held at St. John’s Evangelical Lutheran Church in Riga at a later date to be determined. Please check St. John’s website for further information at www.stjohnsriga.net. Memorial donations may be given to St. John’s Evangelical Lutheran Church or to the Hospice organization of one’s choice. Arrangements were entrusted to the care of Wagley Funeral Home, Tagsold Chapel, Blissfield, where memories and condolences may be shared with the family online at www.WagleyFuneralHome.com.

The family of Lewis J. Beagle created this Life Tributes page to make it easy to share your memories.

Send flowers to the Beagle family.