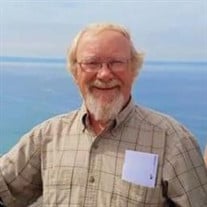 Manitou Beach- Leonard Arthur Gust, 71, of Manitou Beach, Michigan died on Monday, May 23, 2022 at Henry Ford Allegiance Hospital in Jackson with his family by his side. He was born on December 28, 1950 in Adrian to Dale A. and Julia C. (Goddyn) Gust. Leonard attended Blissfield Community Schools and graduated with the Class of 1969. He continued his education at Michigan State University where he graduated in 1974 with a bachelor’s degree in building construction. On May 19, 1979 Leonard married the love of his life, Sharon Maureen Gosselin, and they just celebrated 43 years together. Early in his career, Leonard worked as a carpenter and from there he moved on to Johnson Controls in Manchester, MI. He retired from the Gus Harrison Correctional Facility after 23 years working as a maintenance mechanic and locksmith. Leonard enjoyed being outdoors and active with his family, often spending his free time fishing, hunting or cutting wood. He raised a variety of animals on the family farm, but his favorites were his sheep and barn cats. When his children were younger, he helped them with their 4-H projects and getting their hogs ready for the Lenawee County Fair. Leonard had many laughs and stories to share about the 3-B Rodeo on Sword Highway where he worked behind the chutes for over 15 years. The pride and joy of Leonard’s life is the wonderful family that he and Sharon raised together. In addition to his wife, Sharon, Leonard leaves behind his children, Adam (Betsy), Andrew (Amanda), Arthur (Jamie), Alan (Valerie), Austin, Arnold (Caitlyn), Alex (Monica), Theresa and Ashton; grandchildren, Ezra, Sarah, Levi, Naomi, Aaron, David, Dale, Olivia, Wyatt, Nora, Linnea, Nate, Nolan, Noah, Blake, Bernadette, Beckham, Brently, and Henry; sisters, Louise Heineman and Lorraine Cobb. He was preceded in death by his parents; daughter, Emma Christine; grandson, Benjamin Samuel; granddaughter, Amelia Mae; and his brother, Leon Gust. A private family gathering is planned to celebrate Leonard’s life. All arrangements have been entrusted to Wagley Funeral Home in Adrian. Memorial contributions may be made to the Ronald McDonald House. Online condolences and memories may be shared at www.WagleyFuneralHomes.com.

Manitou Beach- Leonard Arthur Gust, 71, of Manitou Beach, Michigan died on Monday, May 23, 2022 at Henry Ford Allegiance Hospital in Jackson with his family by his side. He was born on December 28, 1950 in Adrian to Dale A. and Julia C. (Goddyn)... View Obituary & Service Information

The family of Leonard Arthur Gust created this Life Tributes page to make it easy to share your memories.

Send flowers to the Gust family.