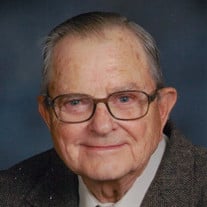 ADRIAN – Leo D. Wild of Adrian went to be with the Lord Monday, September 3, 2018, at the age of 96. He was born July 30, 1922 in Adrian, MI to Frieda (Schweikert) and Fred Wild, and graduated from Adrian High School in 1940. On August 17, 1946, he married Barbara Cole, and they were blessed with over 67 years of marriage. She preceded him in death in 2013. Leo served in the United States Army from August 1940 to November 1945. He then served in the Army Active Reserves from 1956 to 1962. In World War II, he was stationed in the European Theater of Operations in France, Germany and Austria with the 42nd Rainbow Division. He was employed by Kewaunee Scientific Equipment Corporation for many years. Leo was a faithful member of St. Stephen Evangelical Lutheran Church and a life member of VFW Annis Fint Post #1584, as well as a member of the American Legion Post #275, Adrian Police Auxiliary, and the Michigan Chapter of 42nd Rainbow Division Veterans. Leo is survived by his children, Bud Wild of Adrian and Sally (George) Hubble II of Milford, MI; four grandchildren, David Wild of Chehalis, WA, Rebekah Lavigne of Jacksonville, FL, Erica Hubbell of Milford, MI and Lauren Winer of Boulder, CO; and seven great grandchildren. In addition to his parents and wife, he was preceded in death by a brother, Harold Wild and a sister, June Timmerman. Funeral services will take place at 11 a.m., Saturday, September 8, 2018, at St. Stephen Evangelical Lutheran Church in Adrian with Pastor Aaron Jensen officiating. Burial will follow at Oakwood Cemetery with full military honors conducted by VFW Annis Fint Post #1584 and American Legion Post #97. Visitation will be at Wagley Funeral Home, Adrian on Friday from 4 to 7 p.m. Those planning an expression of sympathy may wish to consider a memorial to St. Stephen Evangelical Lutheran Church or the charity of your choice. Online condolences and memories may be shared at www.WagleyFuneralHomes.com.

The family of Leo Donald Wild created this Life Tributes page to make it easy to share your memories.

ADRIAN – Leo D. Wild of Adrian went to be with the Lord Monday,...

Send flowers to the Wild family.