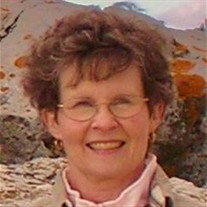 Hudson—Lena L. “Lee” Bachman, 70, formerly of Adrian, passed away Thursday, November 9, 2017, at Maple Ridge Farms Assisted Living under the care of Hospice of Lenawee. She was born March 3, 1947 in Muskegon, Michigan to Donald and Florence (Bateman) LaCoursier. On August 16, 1969, she married William “Bill” Bachman in Alma, Michigan, and they have shared 48 wonderful years together. Lena received a BA in History from Alma College where she met Bill. She worked in Human Services in the manufacturing world. Lena was a long time member of the First United Methodist Church of Adrian and added her angelic voice to the choir. Lena was the “Queen of Arts & Crafts” and demonstrated her talents in sewing, needlepoint, painting, pottery and quilting. Many family members and friends were on the receiving end of her beautiful gifts. She is survived by her husband, Bill; daughters, Lynsey (Keith) Steiner, of Wauwatosa, WI, Erica (Ian) Boyko, of Brentwood, CA; and grandchildren, Joshua, Joelle and Jacob Steiner. In addition to her parents, Lena was preceded in death by her brother, Russell LaCoursier. Cremation has taken place at Lena’s request. A memorial service will be held on Saturday, December 9, 2017 at 11 a.m. at Wagley Funeral Home. Visitation will be from 10 a.m. until the time of the service. In lieu of flowers, memorial contributions may be made to Daybreak Adult Day Services or Hospice of Lenawee. Online condolences and memories may be shared at www.WagleyFuneralHome.com.

The family of Lena L. "Lee" Bachman created this Life Tributes page to make it easy to share your memories.

Send flowers to the Bachman family.