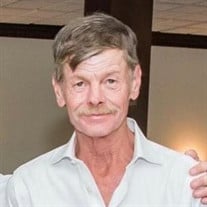 BLISSFIELD- Lawrence “Troy” MacBeth, age 58, of Blissfield, passed away at home surrounded by his wife and children on September 24, 2021. Troy was born on December 14, 1962 in Toledo, OH, the oldest son of Lawrence S. and Shirley (Gallatin) MacBeth. He attended Blissfield High School and graduated with the Class of 1981. On November 22, 1985 Troy married Roxanne Diver at St. Alphonsus Catholic Church in Deerfield and she survives. Growing up Troy was involved with 4-H and worked on his friends’ family farms. It was always his dream to have a farm of his own; shortly after getting married, Troy and Roxanne started farming out in Ogden Center and have continued the dream for over 35 years. Troy also worked as a foundry operator at Ervin Amasteel for 22 years. Troy was a dedicated Spartans fan and loved to cheer his team on while watching the game on his big screen projector out in his shop. He was an avid outdoorsman, where he enjoyed hunting, fishing, snowmobiling and four wheeling. Troy was a member of the National Wild Turkey Federation, Pheasants Forever and the NRA. He loved spending time with his children and was involved in their activities, such as being a 4-H leader for the South Riga Go-Getters and New Beginnings; and raising show pigs. When his daughter, Morgan, was young he helped coach little league baseball in Blissfield. Troy was an extremely generous and caring person with a heart larger than life. He always took the time to help others in need and never expected anything in return. In addition to his wife of 35 years, Roxanne, Troy is survived by his son, Conrad MacBeth (Kara Ehmann) and his daughter, Morgan (Ryan) Powell; one granddaughter, Bellamy Powell, aka Pumpkin; mother, Shirley MacBeth; sister, Edith (Danny)Bowles; and many nieces , nephews, extended family members and friends. He was preceded in death by his father, Lawrence S. MacBeth; brother, Tobin MacBeth; and grandparents, Lawrence S. and Eva MacBeth, and Herschel and Edith Gallatin. Funeral services for Troy will be held on Thursday, September 30, 2021 at 12 p.m. at Wagley Funeral Home, Tagsold Chapel, in Blissfield with Travis Havens. Visitation will be on Wednesday, September 29, 2021 from 3 to 8 p.m. at the funeral home and again on Thursday from 10 a.m. until the time of the service. Burial will follow at Ogden Cemetery. Memorial contributions in Troy’s name may be made to the charity of your choice. Online condolences and memories may be shared at www.WagleyFuneralHomes.com.

The family of Lawrence "Troy" MacBeth created this Life Tributes page to make it easy to share your memories.