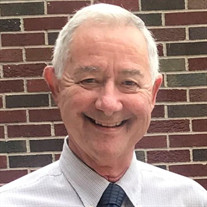 ARCHBOLD, OH – Larry D. Snow, 71, of rural Archbold, formerly of Pettisville, Ohio, went home to be with Jesus on Sunday evening, January 3, 2021. Born August 2, 1949, in Morenci, MI, he was the son of the late Clifford and Doris (Bacon) Snow. Larry lived his formative years in Fayette and graduated from Gorham-Fayette High School with the Class of 1967. He furthered his education by obtaining an Associate Degree at Jackson Business College. He married the love of his life, Sheryl Lea Apple, on April 24, 1971, in Bryan, OH, in a ceremony led by Pastor Richard Keese, and she preceded him in death on April 11, 2017. Larry and Sheryl raised their family in West Unity before later building a home in rural Pettisville. Larry spent his professional career working as the Vice President of Handy & Harmon of Archbold, and later as a purchasing manager for Sauder Manufacturing Company. Larry was called to ministry in 1988, and pastored for 32 years at West Franklin Church of Christ near West Unity, OH. He was a selfless servant, who loved to share the love of Jesus with everyone he encountered. He was a current board member for Team Expansion Mission Project. He was skilled at woodworking, and made many crafts and treasured keepsakes for his family. Larry and Sheryl marketed their crafts at various craft shows and they also co-owned a puppy business, Snow’s Poodles and Doodles. At age 60, Larry received the gift of life from his son, Eric, through a necessary kidney transplant, and has been an advocate of Donate for Life ever since. Larry was also an avid Detroit Tigers Baseball fan, to state it lightly. Larry’s greatest passion, however, was his family whom he adored. Surviving are a son, Eric (Brooke) Snow of Defiance, OH; two daughters, Melissa (Dan) McKeever of Archbold, and Angie (Mark) Billups of Fayette; a brother, Roger (Kathy) Snow of Huntsville, NC; two sisters, Janet Reynolds and Myrna (Richard) Brown both of Wauseon, OH; ten beloved grandchildren, Zach, Grant (Hannah), Marina (Michael), Logan (Sami), Morgan (Matt), Brennan, Ashton, Drake, Kendyl (Chris), and Summer; and two great-grandchildren, Emma and Wynter; mother-in-law, Joyce Apple of Alvordton, OH; four sisters-in-law, Cindy (Rob) Heller, Connie (Kent) Landis, Sandy (Troy) Carpenter, and Jan Seymour; a brother-in-law, Dave Apple; and numerous nieces and nephews and extended family Larry was welcomed to heaven by his loving wife of 46 years, Sheryl; his parents; father-in-law, Richard Apple (d. December 25, 2020); two brothers-in-law, Jerry Reynolds and Ron Apple; a sister-in-law, Sherry Apple; as well as generations of beloved extended family members. Visitation will be held Thursday, January 7, 2021, from 12:00 p.m. until 6:00 p.m. at the Church of Christ at West Unity (1205 W. Jackson St.) . A victory celebration for Larry will follow at 6:00 p.m. with son-in-law Mark Billups and nephew Larry Kennedy officiating. Cremation will follow and burial will take place at a later date at the Pleasant View Union Cemetery in Fayette, OH. Arrangements were entrusted to the care of Wagley Funeral Home, Adrian, Michigan. Memorial contributions in honor of Larry can be made to Donate for Life. Following the Ohio Governor’s executive order, all attendees are required to wear a proper face covering. For those unable to be present, a live streaming of the service will be accessible from Larry’s tribute wall on www.WagleyFuneralHome.com, where a link to view the recording will be available for 90 days. Online memories and condolences may be shared at www.WagleyFuneralHomes.com

The family of Larry D. Snow created this Life Tributes page to make it easy to share your memories.

Send flowers to the Snow family.