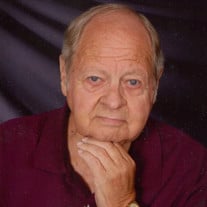 Adrian—Larry J. Powers, age 75 of Adrian, passed away Friday, January 12, 2018 at Toledo Hospital. Larry was born November 8, 1942 in Adrian to Ada Powers. He was raised by his loving aunt and uncle, Denver and Lillian Powers. On April 11, 1964, he married the love of his life, Janice Simons, in Toledo, OH; they were blessed with 53 years of marriage. He graduated from Addison High School in 1961 and then attended Jackson Community College. He worked as a supervisor at Fisher Body for 25 years, from the time they opened the Tecumseh plant until the closing, he then transferred to the Euclid, OH plant until retirement. Family was very important to Larry, especially his grandchildren and their sporting events. He often shared his opinion on the calls the referees made during their events. He enjoyed fishing at the family cottage, playing games, especially cards. Larry was a charter member of Hope Lutheran Church. In addition to his devoted wife, Janice, Larry is survived by his children, Keith (Wendi) of Fort Wayne, Pamela of Grand Rapids and Brian (Stephanie) of Adrian; brother Jerry (Ginger) of Jonesville, sister, Linda Sorrels of CA; mother-in-law, Violet Simons; and grandchildren, Corey, Tristan, Kobe and Asya. He was preceded in death by his mother, Ada; and his aunt and uncle, Denver and Lillian Powers. Funeral services for Larry will be at 1 pm on Wednesday, January 17, 2018 at Hope Lutheran Church, Adrian with Rev. Paul Herter officiating. Visitation will be from 11 am until the time of the service at the church. Burial will follow at Lenawee Hills Memorial Park. Memorial contributions may be made to Hope Lutheran Church; envelopes will be available at the church. Arrangements were entrusted to Wagley Funeral Home where online condolences and memories may be shared with the family at www.WagleyFuneralHome.com.

Adrian&#8212;Larry J. Powers, age 75 of Adrian, passed away Friday, January 12, 2018 at Toledo Hospital. Larry was born November 8, 1942 in Adrian to Ada Powers. He was raised by his loving aunt and uncle, Denver and Lillian Powers. On... View Obituary & Service Information

The family of Larry J Powers created this Life Tributes page to make it easy to share your memories.

Send flowers to the Powers family.