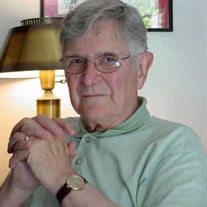 ADRIAN – Dr. Landis C Stewart, MD, age 97, of Adrian, MI passed away on Tuesday afternoon, February 16, 2021, at home with his family by his side. Landis was born on September 6, 1923, to Waldron and Neta (Sawyer) Stewart in Adrian. His mother, Neta, died when Landis was a young boy; and he was blessed when his father married Geraldine Miller, who loved and raised him as her own. His thirst for knowledge and adventure was evident at a young age. Landis graduated from Adrian High School and started attending classes at Adrian College before he was called into service during World War II. During the War, he graduated first in his class at The U.S. Navy Officer Candidate School (OCS) at Cornell University and went on to become an Ensign aboard the USS Beverly W. Reid, which was tasked to be part of the Invasion of Japan when the war ended. After the War and upon his discharge from the Navy in 1946, Landis returned to Adrian College using the GI Bill and earned his bachelor’s degree in chemistry. He went on to the University of Michigan where he received his Medical Doctor (MD) in 1950. From there, he interned at Henry Ford Hospital in Detroit and then completed his residency in Ophthalmology at the University of Iowa. While in Iowa, he met a special redhead Carol Landis. The two discovered they had much more in common than just the name Landis, and were married on August 21, 1954 in Wichita, Kansas. Landis and Carol moved to Marquette, MI where he started his Ophthalmology practice. After two years, Landis moved his young family home to Adrian in 1956 where he started his new practice. Over the next 50 years, he dedicated himself to practicing Ophthalmology for the residents of Lenawee County. Landis loved his family and enjoyed being active. He was a common face at the local YMCA where he played racquetball for over 55 years at lunchtime with friends. Flying airplanes was Landis’ passion, and he piloted Cessna’s from Lenawee County Airport for family, business, and philanthropic missions. These missions included flying search-and-rescue for the Civil Air Patrol (U.S. Air Force Auxiliary), and medical patient transport for Angel Flight. Over the years, Landis attended First Baptist Church in Adrian, Adrian First United Methodist Church, and West Rome Baptist Church. He is survived by his wife, Carol, of 66 years; children Elizabeth Lucille Stewart, David Landis (Kimberly) Stewart, Peter Clifford Stewart, Joseph Donald (Patricia Maria) Stewart, Frances Marian Stewart, Martha Virginia Landis (Alex Britton) Stewart and Robert Landis Stewart; 15 grandchildren and 4 great grandchildren. Landis was preceded in death by his brothers, Waldron and Gordon Stewart. There will be a Celebration of Life on Sunday June 20, 2021 at 2 p.m. at Adrian College, in the Tobias Room. Wagley Funeral Home, Adrian has been entrusted with arrangements, where online memories and condolences may be shared at www.WagleyFuneralHomes.com.

The family of Dr. Landis C. Stewart MD created this Life Tributes page to make it easy to share your memories.

Send flowers to the Stewart family.