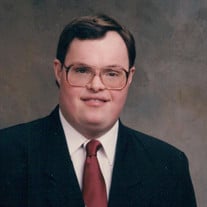 ADRIAN- Kevin Matthew Tillotson, 53 of Adrian, passed away at his home Wednesday, March 10, 2021, under the loving care of his family. He was born December 1, 1967, in Adrian, the youngest son of Ralph and Virginia (Pate) Tillotson. He graduated from Lenawee Porter Center and attended Lenawee Vo-Tech. Kevin was a confirmed member of St. Stephen Lutheran Church. Kevin’s first job out of school was at Taco Bell. He then worked at Country Market for 23 years. He was a big part of Tillotson Auctioneer Team and Tillotson Fruit and Vegetable stands. Kevin’s greatest joy was his family. He loved family parties and get togethers. He was blessed with two exceptional brothers who took him everywhere with their friends, Herbie, Matt, Adam, Dean, Tim, Kevin B. and Scott. For many years he had two special cousins, Lori and Arron, who visited from Florida to spend summer on the farm. They enjoyed roller skating, 4-H softball, movies and swimming after chores were done which included walking sheep for two hours each day. Kevin was an avid sports fan of U of M Football, Duke Basketball, Dallas Cowboys and Detroit Tigers. Michigan football was #1. He loved an annual game at the Big House and had the opportunity to go in the locker rooms and run out through the tunnel. He attended Detroit Tiger games and had the thrill of being given a ball by Reggie Jackson. Unfortunately, Reggie was kicked out of the game and was not able to sign the ball. Kevin played 4-H softball for 8 years. He was a great supporter of his nieces and nephews attending their basketball, football, volleyball and baseball games. A couple of Kevin’s greatest passions were the Lenawee County Fair and the Lenawee County 4-H Programs. He showed lambs, steers and swine at the fair and was proud of his grand champion lamb. He loved attending the livestock shows and helping his nieces and nephews with their animals. Kevin considered the 4-H members a part of his family. In addition to his parents, he is survived by his brothers, Mark (Sandy) Tillotson and Keith (Lynette) Tillotson; and nieces and nephews: Amanda Brooks, Chelsea Shadewald, Jacob Tillotson, Kyle Tillotson, Ashley Kissell, Carly Penterics and Clint Tillotson. Due to Covid 19 the funeral service will be private. A live streaming of the service will be accessible from Kevin’s tribute wall on www.WagleyFuneralHomes.com, beginning at 11 a.m., Saturday, March 13, 2021. Family and friends are welcome at a graveside service at 12:30 p.m., Saturday, March 13, 2021 at Oakwood Cemetery. To honor Kevin, please wear your favorite sports team attire. In lieu of flowers, contributions in memory of Kevin may be directed to Hospice of Lenawee or Lenawee County 4-H for special livestock projects. Arrangements have been entrusted to Wagley Funeral Home where online condolences and memories may be shared at www.WagleyFuneralHomes.com.

ADRIAN- Kevin Matthew Tillotson, 53 of Adrian, passed away at his home Wednesday, March 10, 2021, under the loving care of his family. He was born December 1, 1967, in Adrian, the youngest son of Ralph and Virginia (Pate) Tillotson. He graduated... View Obituary & Service Information

The family of Kevin Matthew Tillotson created this Life Tributes page to make it easy to share your memories.

ADRIAN- Kevin Matthew Tillotson, 53 of Adrian, passed away at...

Send flowers to the Tillotson family.