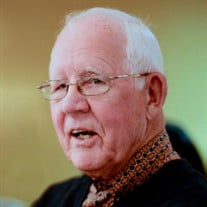 ADRIAN –Kenneth E. Vancil, 96, of Adrian died on Tuesday, afternoon February 1, 2022 at the Hospice of Lenawee Home, with his family by his side. Born June 28, 1925 in Canton, Ohio, he was the son of Kenneth W. and Elsie M. (Smith) Vancil. Ken graduated from Canton High School in 1943. He then enlisted in the U.S. Navy during World War II, serving in the combat zone of the Central Pacific and later, anti-submarine patrol on the East Coast of the United States. Making him a part of our Nation’s “Greatest Generation.” On July 22, 1950, Ken married the love of his life, Jean I. Ruch. She survives to cherish over 71 years of love and memories. Ken was employed as the Manager for Production Planning for American Chain and Cable until his retirement. He was an active and faithful member of the West Adrian Church. He was also a member of VFW Post 1584, American Legion Post 0225, the Destroyer Escort Sailors Association in Florida, and the Masons. He was a Master Mason of Palmyra Lodge #185 and a 32nd degree Scottish Rite Mason of the Valley of Toledo, Ohio. Following Ken’s retirement, the couple moved to Pinehurst, NC and enjoyed many years of golf and travelling to the Southern states. Upon returning to Adrian to be with family, the couple traveled to Alaska, Bermuda and made several trips to the Western United States. Ken was very active during his retirement years. He enjoyed golfing, bowling, fishing, photography, target shooting with his sons, Mike and Steve, driving his Mustangs, woodworking, and gardening. He was an avid Ohio State Buckeye fan. In addition to his beloved wife, Jean, Ken is survived by his children, Mike Vancil of Adrian, Jan (Gary) Fox of Adrian, and Steve Vancil of Blissfield; grandchildren, Rebecca Aviles of California, Haley (Dustin) Bourns of Riga, Lori (Jeff) Yates of Ferndale, and Stevie Ray Vancil of Adrian; and three great-grandchildren, Van and Penelope Bourns and Vida Yates. Ken was preceded in death by his parents, a sister and brother-in-law, a nephew, a grandson, and many aunts, uncles, and cousins. Services for Ken will be private. Wagley Funeral Home, Adrian has been entrusted with arrangements, where online memories and condolences may be shared at www.wagleyfuneralhomes.com. Ken will be laid to rest at Lenawee Hills Memorial Park in Adrian. The family suggests that memorial contributions to honor Ken’s memory be made to the charity of one’s choice.

The family of Kenneth E. Vancil created this Life Tributes page to make it easy to share your memories.

Send flowers to the Vancil family.