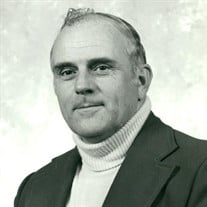 ADRIAN – Kenneth John Mitchell age 86, of Adrian, died Friday March 11, 2022 at Gas Light Village under the care of Hospice of Lenawee with his loving family by his side. He was born at home on October 2, 1935 in Adrian, Michigan to William John and Gladys (Dawson) Mitchell. Ken lived on the family farm his whole life and took pride in carrying on the farming tradition. He graduated from Blissfield High School with the Class of 1954 and went on to earn his bachelor’s and master’s degrees from Michigan State with a focus on Agriculture and Education. Ken served his country in the United States Navy from 1957 to 1959, and it was during this time that he learned how to fly planes. Following his discharge from the Navy Ken returned to Adrian, where he became a flight instructor at Jacobs Flight School at the Lenawee County Airport. On August 26, 1962 Ken married Eileen Fink in Ottawa Lake, MI and they have been blessed with over 59 years together of raising a family, farming and creating many memories. Ken was the Ag teacher and FFA leader at Sand Creek Community Schools for 10 years, earning the FFA Honorary State Farmer Award in 1970. He worked for Linehan Realty for many years, was a member of the Lenawee County Association of Realtors and a past board president. In 1992 Ken earned the Lenawee County Realtor of the Year Award. He also gave of his time and was involved with Lenawee County Farm Bureau, where he earned Volunteer of the Year for several years. Ken had a presence about him and when he opened his mouth, he got everyone’s attention; whether it was calling out bids for over 40 years at auctions or just visiting with friends, you listened to what Ken had to say. He made many friends and had stories to share over the years from taking bids at the Lenawee County Fair Jr. Livestock Auction or for the many benefit auctions he participated in. Ken’s legacy has continued with Mitchell Auctioneering being run by his son, David, and his grandchildren, making it a third-generation tradition. In addition to his wife, Eileen, Ken is survived by their children, Patty (Jim) Collins, Russ (Laura) Mitchell and David (Michele) Mitchell; grandchildren, Michaela, Sean, Mandy (Jeffrey), Tim, Tom, Josh, Jobe, Holly, Katie, Dottie and Abbie; great-grandchildren, Vivian, Eleanor, Jonathan, Sophia and Titus; and his sister, Marjorie Fetsko. He was preceded in death by an infant daughter, Ann; and siblings, Don Mitchell, Mildred Oosse, Marie Rathbun and Doris Luce. Funeral services will be held on Friday, March 18, 2022 at 11 a.m. at Wagley Funeral Home in Adrian with Pastor Joshua Rinas and Ken’s nephew, Bill Fink officiating. Burial will be private at Oakwood Cemetery. Visitation will take place on Thursday, March 17, 2022 from 3 to 7 p.m. at the funeral home and again Friday at 10 a.m. until the start of the service. In lieu of flowers, memorial contributions may be made to Hospice of Lenawee, Lenawee County FFA Alumni Association or the Lenawee County 4-H Council. Online condolences and memories may be shared at www.WagleyFuneralHomes.com.

ADRIAN &#8211; Kenneth John Mitchell age 86, of Adrian, died Friday March 11, 2022 at Gas Light Village under the care of Hospice of Lenawee with his loving family by his side. He was born at home on October 2, 1935 in Adrian, Michigan to William... View Obituary & Service Information

The family of Kenneth John Mitchell created this Life Tributes page to make it easy to share your memories.

Send flowers to the Mitchell family.