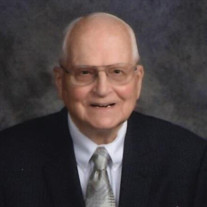 ADRIAN – Kenneth H. Gonser, 83, of Adrian died early Monday morning, September 7, 2020 at Lenawee Medical Care Facility in Adrian surrounded by his family, while under the compassionate care of Hospice of Lenawee. Born July 30, 1937 in Willis, MI, he was the son of the late Ivan and Alma (Rutherford) Gonser. Following high school, Ken enlisted in the Army and proudly served his country. He earned his Bachelor’s Degree from Adrian College. Ken was employed as Director of Goodwill LARC until his retirement. He received many awards and accolades during his employment with Goodwill Industries, but his greatest reward in life was serving the community he cherished. Ken was an active member of the Adrian First United Methodist Church. In his spare time, Ken truly enjoyed participating in Civil War Roundtables. On June 13, 1958 Ken married the love of his life, Evelyn Geer at the First United Methodist Church in Lexington, MI. Evie survives to cherish the memories they created in over 62 years of marriage. In addition to his wife, Evie, Ken is survived by his daughters, Dawn (Ben) Stornant, Terri (Mitchell) Fields, and Kim (Jeff) Langley; seven grandchildren, Zachary (Pao) Stornant, Lindsey (Thad) Mills, Trevor (Britni) Stornant, Chelsea Fields, Abby Fields, Joshua Langley, and Jordan Langley; six great-grandchildren, Mila and David Stornant, Lia and Livia Mills, and Lucas and Lillian Stornant; his siblings, Donald (Jill) Gonser and Marvin (Marilyn) Gonser; and sister-in-law, Maria (Jack) Fry. He was preceded in death by his parents, and his brother, Robert Gonser. A memorial service for Ken will be held on Sunday, July 25, 2021 at 2:00 p.m. at Wagley Funeral Home with Rev. Eric Stone officiating. Visitation will begin at 1:00 p.m. and continue until the time of the service. A live streaming of the service will be accessible from Ken’s tribute wall on www.WagleyFuneralHomes.com where a link to view the recording will be available for 90 days. Online memories and condolences may be shared at www.WagleyFuneralHomes.com. In lieu of flowers, to honor Ken’s life, the family suggests that memorial contributions be made to Goodwill Industries or the Adrian First United Methodist Church.

The family of Kenneth H. Gonser created this Life Tributes page to make it easy to share your memories.

Send flowers to the Gonser family.