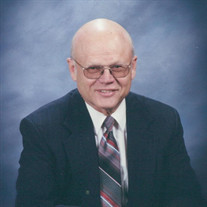 BLISSFIELD – Keith Allan Smith, age 89 of Blissfield, passed away Saturday, June 11, 2022, at Toledo Hospital. Keith was born November 4, 1932, in LaSalle, Michigan the son of Russell and Dorothy (Budlong) Smith. Keith graduated from Ida High School in 1951, Huntington College in 1961 and Huntington College Seminary in 1965. Keith was drafted into the Army and served in Germany from 1953 – 1955. On June 22, 1957, he married Dorothy Loar in Blissfield and she survives. Keith and Dorothy were going to celebrate their 65th wedding anniversary in another week. Their life together reflected love and a strong spiritual faith that they shared with everyone they encountered He retired from farming and pastoral ministry. Keith’s ability to socialize was a good fit for being the Minister of Visitation at Elem3nt Church in Blissfield. His family can vouch that Keith never knew a stranger and could make a social event out of going to get a haircut. Keith’s grandchildren report that grandpa could tell the best stories and had plenty to share. He is survived by his wife, Dorothy; two daughters, Karen (Alan) Faler and Lisa Smith (Justin Schmidt); four grandchildren, Devet (Nick) Coopshaw, Josh (Chelsea) Wood, Emilee Heath (Jacob Ammerman) and Beth (Nathanael) Crout and five great grandchildren. He is also survived by his sister, Faye Henry; and two brothers, Wayne, and Carl Smith. He was preceded in death by his parents and four brothers, Herbert, Lawrence, Lauren and Harold. Funeral services will take place on Thursday, June 16, 2022 at 11 a.m. at Elem3nt Church in Blissfield with Pastor Gayle Ruble officiating. Burial will follow at Ogden Township Cemetery. Visitation will be held on Wednesday, June 15, 2022 from 6 to 8 p.m. at Elem3nt Church. All arrangements have been entrusted to Wagley Funeral Home, Tagsold Chapel, in Blissfield. Memorial contributions in honor of Keith may be made to Elem3nt Church, Blissfield. Online condolences and memories may be shared at www.WagleyFuneralHomes.com.

The family of Keith Allan Smith created this Life Tributes page to make it easy to share your memories.