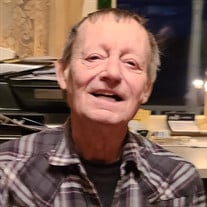 BLISSFIELD – Keith A. Krause, 76, of Blissfield died Monday evening, June 7, 2021 at ProMedica Flower Hospital in Sylvania, Ohio. Born July 26, 1944 in Toledo, Ohio, he was the son of Richard and Roberta (Wunder) Krause. Keith attended Whitmer and Bedford High Schools. In 1963 he graduated from Bedford High School and proudly served in the Army National Guard as a Specialist during the Vietnam War. In 1971, Keith married Nancy Kruczkowski in Lansing. She preceded him in death in 1997 after 26 years of love and laughter. He was employed as a millwright for over forty years for the Dana Corporation and General Motors, until his retirement in 2006. He was a proud member of the U.A.W. Locals #12 and #14, the Blissfield American Legion Post 325, the Lenawee Humane Society, and many other local organizations. Known to many as “neighbor Keith”, he always had a story to share that could make you smile. There were many good memories from spending time up in Gaylord, MI where Keith enjoyed fishing and visiting with friends. Keith’s easygoing manner attracted many friends and he never knew a stranger. Keith is survived by his son, Richard L. Elizabeth (Beth) Krause, of Northwood, OH; and half-brothers, Richard Krause of Adrian and David Krause of Texas. He was preceded in death by his loving wife, Nancy; sister, Karen Krause; father, Richard Krause; mother, Roberta Geraldine; step-mother, Doris Krause; and step-father, Darrell Geraldine. Funeral services for Keith will be held on Saturday, June 12, 2021, at noon at Wagley Funeral Home, Tagsold Chapel, in Blissfield, with Pastor Ronald Schinkle officiating. Military honors will be conducted by Blissfield American Legion Post #325. Visitation will take place on Friday, June 11, 2021 from 4 to 8 p.m. at the funeral home. Per Keith’s request, cremation will follow. Keith’s ashes will be privately laid to rest next to his beloved wife, Nancy in Toledo Memorial Park in Sylvania, OH. Memorial contributions to honor Keith may be made to the Lenawee Humane Society, the Lenawee County Mission, or the charity of one’s choice. Online condolences and memories may be shared at www.WagleyFuneralHomes.com.

The family of Keith A. Krause created this Life Tributes page to make it easy to share your memories.

Send flowers to the Krause family.