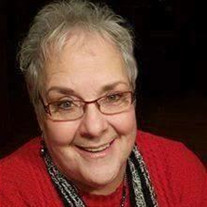 BLISSFIELD – Kathryn A. Sheldon, age 62 of Blissfield, passed away Wednesday, November 9, 2016 at Ebeid Hospice in Sylvania. She was born February 27, 1954, in Charlotte, Michigan, the youngest child of Clayton and Edith “Kathryn” (Rozeboom) Wilson. Kathy graduated in 1972 from Blissfield High School and earned a Bachelor’s Degree from Adrian College in 1995. She also attended Eastern Michigan University. On February 24, 1973, she married Michael Sheldon in Blissfield, and they have been blessed with 43 years together. Kathy taught elementary and middle school at Monroe Public Schools and Adrian Public Schools where she retired in 2015. She was very involved with 4-H as a leader and also as Food Superintendent at the fair for over 20 years. Her most treasured time was with her family as a stay at home mom and later, as an actively involved grandmother. Kathy loved fabric, sewing, and making quilts. She also enjoyed swimming, gardening and traveling. In addition to her husband, Michael, she is survived by their children: Kelly (Jason) Higgins of Adrian, Nicholas (Tovah) Sheldon of Jackson, Neal (Alyson) Sheldon of Chelsea, and Kimberly (Isaac) Phillips of Midland; grandchildren: Amy and Zach Higgins, Wilson and Amari Sheldon, Gavin Phillips, Isabella Sheldon, and soon to be born, Baby Phillips; two sisters, Susan (Jim) Gilmore of Tecumseh and Mary (Robert) Gooze of Oregon, WI; and many nieces and nephews. She was preceded in death by her parents. Funeral services will take place Monday, November 14, 2016 at 11:00 a.m. at the First United Methodist Church in Blissfield with Rev. Kristen Parks officiating. Burial will follow at Palmyra Cemetery. Friends may visit the family Sunday at Wagley Funeral Home, Tagsold Chapel in Blissfield from1 to 4 p.m. and 6 to 8 p.m. Contributions in memory of Kathy are suggested to First United Methodist Church or Adrian Public Schools for their Families in Transition program. Online condolences and memories may be shared at www.WagleyFuneralHomes.com.

BLISSFIELD &#8211; Kathryn A. Sheldon, age 62 of Blissfield, passed away Wednesday, November 9, 2016 at Ebeid Hospice in Sylvania. She was born February 27, 1954, in Charlotte, Michigan, the youngest child of Clayton and Edith... View Obituary & Service Information

The family of Kathryn A. Sheldon created this Life Tributes page to make it easy to share your memories.

Send flowers to the Sheldon family.