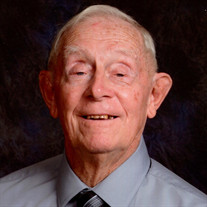 DEERFIELD – Julius B. Brown, age 92 of Deerfield, passed away Saturday, March 16, 2019, at his home under the loving care of his family. He was born July 24, 1926, in Leipsic, Ohio, to August and Adelaide (Vennekotter) Brown, and graduated from Miller City High School. During World War II, he was stationed in France and Germany while serving in the United States Army. On September 27, 1952, Julius married Martha Ann Hilvers and they celebrated over 64 years together. She preceded him in death in 2017. Julius owned and operated Home Acres Heating and Plumbing. He was a faithful member of Light of Christ Catholic Church, St. Alphonsus Parish. In his free time he enjoyed fishing and woodworking. His many friends and neighbors will miss seeing Julius on his extensive walks. He is survived by his children: Patricia (Terry) Reau of Blissfield, Margaret (Jack) Ward of Tecumseh, Karen (Robert) Wilson of Blissfield, Sr. Janice Brown O.P. of Chicago, Susan (David) Zittleman of Temperance, Thomas (Connie) Brown of Blissfield, Kayleen Cristman and Christina (Joe) Frank, both of Deerfield; daughter-in-law, Cindy Brown; 21 grandchildren, 18 great grandchildren; and siblings: Clara Buckland, Ladonna Bryan, Donald Brown and Kathleen Serra. In addition to his parents and wife, he was preceded in death by a son, James Brown; and two sisters, Helen Snyder and Rita Jane Schroeder. A Funeral Mass will take place at 11 a.m., Wednesday, March 20, 2019 at Light of Christ Catholic Church, St. Alphonsus Parish in Deerfield with Rev. Jeffrey Poll as Celebrant. Burial will follow at St. Alphonsus Catholic Cemetery with military honors conducted by Deerfield American Legion Post #392. Visitation will be held at Wagley Funeral Home, Tagsold Chapel in Blissfield on Tuesday from 2 to 8 p.m., where a Rosary Service will be held at 7 p.m. There will also be visitation at the church on Wednesday from 10 to 10:45 a.m. followed by Mass. Contributions in memory of Julius are suggested to Light of Christ Catholic Parish for Masses, Alzheimer’s Association or Great Lakes Hospice. Online condolences and memories may be shared at www.WagleyFuneralHomes.com.

DEERFIELD &#8211; Julius B. Brown, age 92 of Deerfield, passed away Saturday, March 16, 2019, at his home under the loving care of his family. He was born July 24, 1926, in Leipsic, Ohio, to August and Adelaide (Vennekotter) Brown, and graduated... View Obituary & Service Information

The family of Julius Bernard Brown created this Life Tributes page to make it easy to share your memories.

DEERFIELD – Julius B. Brown, age 92 of Deerfield, passed away...