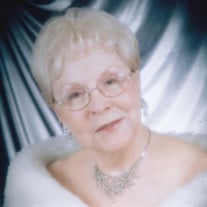 Not sure what to send?

ADRIAN – Juanita Regina Reynolds, age 89 of Adrian, died on Thursday, January 6, 2022, at Lenawee Medical Care Facility under the care of Hospice of Lenawee. Born on December 2, 1932, in Hamilton, Alabama, Juanita was the fourth child out of 8 children to Harvey S. and Frances E. (Hallmark) Williams. Juanita married Robert A. Reynolds, Sr. in 1949, and during their thirty years together they raised 4 wonderful children, 3 sons and 1 daughter. In 1989, Juanita was fortunate to find love a second time and married Donald Meadows. They were blessed with 29 years together before his death in 2018. When Juanita was younger, she enjoyed working in retail at Shoppers Fair and managing the Fashion Bug store in the Adrian Mall. She was an excellent seamstress and made many clothes for her family. She was an avid reader and loved the different aspects of astrology. Family time was what Juanita treasured the most. Birthdays and holidays were made extra special with Juanita’s cooking and the joy she would bring to everyone. She is survived by her children, Robert A. Reynolds, Jr. of Fort Dodge, IA, Dudley E. (Sherry) Reynolds of Callahan, FL, Harvey S. (Birgitt) Reynolds of Denton, TX and Tonya L. Braman of Adrian; grandchildren, Lori Y. Reynolds, Heidi L. Taylor, Brandi N. Carroll, Mika M. Stoeckert, Elizabeth L. Reynolds and Robert A. Reynolds; 11 great-grandchildren; 3 great-great-grandchildren and siblings, Harvey D. Williams and Lessie Angela Mills. Juanita was preceded in death by her husbands, Robert A. Reynolds, Sr., and Donald Meadows; son, Michael A. Reynolds; grandson, Robert E. Vincze and granddaughter, Aubrey M. Reynolds. Following Juanita’s wishes, cremation will take place. There will be a Family and Friends Gathering on Saturday, June 11, 2022 at 11:00 AM at Oakwood Cemetery for the inurnment of Juanita Reynolds. A Celebration of Life will follow at her daughter, Tonya Braman's home- 1225 Church St. Adrian, MI (Village of Fairfield). Arrangements have been entrusted to Wagley Funeral Home, Adrian. Online condolences and memories may be shared at www.WagleyFuneralHomes.com.

The family of Juanita Regina Reynolds created this Life Tributes page to make it easy to share your memories.

Send flowers to Juanita's Gathering of Family and Friends.