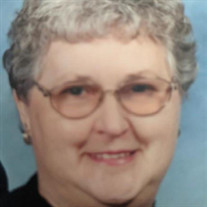 BLISSFIELD – Joyce Elaine Stucker, 85, lifelong resident of Blissfield, died Tuesday afternoon, October 19, 2021 at The Oasis of Adrian, while under the compassionate care of Hospice of Lenawee. Born September 9, 1936, in Blissfield, she was the daughter of Raymond and Hazel (Sayler) Bierley. Growing up, Joyce attended Victorsville Elementary School. While attending Blissfield High School, Joyce was a member of the Royals Majorette Troupe and worked at the Sprunk Brothers Grocery Store. Upon graduating high school, Joyce worked for the Blissfield Phone Company. It was also at this time that she fell in love with her high school sweetheart, DeArle Eugene Stucker. On November 27, 1954 Joyce and DeArle were united in marriage at the Blissfield Methodist Church with the groom’s father, Rev. A.E. Stucker officiating. After marrying, the couple moved to the Stucker family farm in the Morenci area, while Joyce worked for the Porter Lumber Company. Shortly after that, the couple relocated back to Blissfield, where they happily raised their family. Throughout her lifetime Joyce was a devoted wife, mother, and homemaker. In her spare time, Joyce loved crafting, especially crocheting, knitting, and quilting. She also enjoyed cooking, baking, and was known for her cinnamon rolls. Joyce is survived by her husband of over 66 years, DeArle; their children Robert (Leigh Anne) Stucker of Blissfield, Douglas (Patricia) Stucker of Temperance, and Brenda (Andy) Hummell of Tucson, AZ; daughter-in-law, Nancy Stucker of Eaton Rapids; ten grandchildren; 18 great-grandchildren; and her sisters, Janice Sanford and Judy Governo. She was preceded in death by her parents; eldest son, Steven Stucker; great-granddaughter, Nora Swift; and brother, Russell Bierley. Per Joyce’s request, cremation will take place. Arrangements have been entrusted to Wagley Funeral Home, Tagsold Chapel, Blissfield, where online condolences and memories may be shared at www.WagleyFuneralHomes.com. To honor Joyce’s memory, the family suggests that memorial contributions in her name be made to the Blissfield Senior Center.

The family of Joyce Elaine Stucker created this Life Tributes page to make it easy to share your memories.

Send flowers to the Stucker family.