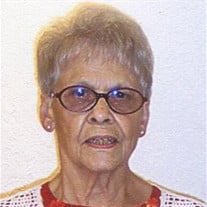 ADRIAN – Joyce I. Oliver, age 86 of Adrian, passed away Saturday, January 18, 2020, at Charlotte Stephenson Manor. She was born January 4, 1934, in Jackson, Michigan, the only daughter of Tracey “Roy” and Lillian (Barrett) Snyder and graduated from Jackson High School. Joyce was married to Royce Oliver who preceded her in death in 1981. She later married James Tonneberger who preceded her in death in 2013. Joyce retired from Lenawee County with over 20 years of service in the Equalization Department. She loved playing numerous card games with friends and family, and enjoyed many winters in Sun City Center, Florida. She attended Ogden Church. Surviving Joyce are her children, Kathleen (Robert) Lewis of Adrian and Gary (Sally) Oliver of Onsted; grandchildren, Sarah Lewis, Stacey (Austin) Prater, Nathan Oliver, Zachary Oliver and Kelly (Sam) Simpson; and 6 great grandchildren. In addition to her husbands, she was preceded in death by her four older brothers, William, Dale, Donald and Robert Snyder. Funeral services will take place at 11 a.m., Friday, January 24, 2020 at Wagley Funeral Home with Rev. John Maguire officiating. Burial will follow at Oakwood Cemetery. Visitation will be held at the funeral home Thursday, from 5 to 8 p.m. Contributions in memory of Joyce are suggested to Hospice of Lenawee or Ogden Church. Online condolences and memories may be shared at www.WagleyFuneralHomes.com.

The family of Joyce I. Oliver created this Life Tributes page to make it easy to share your memories.

Send flowers to the Oliver family.