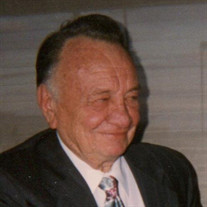 BLISSFIELD – Johnny R. Osenko, one of Blissfield’s oldest and brightest individuals passed peacefully into eternal life on Saturday evening, February 9, 2019, in his home of over 60 years. He was surrounded by both his loving daughters at the time. Johnny was 95 years old and a lifelong Blissfield resident. He was well known in southeast Michigan for his athletic skills in baseball, basketball and football, especially as a “Sugar Boy” on the old Blissfield High teams. At one time, he tried out for the Detroit Tigers and in the 1940’s Johnny sparred with Joe Lewis. In 2005, he was preceded in death by his beloved wife, Helen Shough. They were together for over 50 years and raised 3 children. Some may recall Johnny’s days in Fogel’s Gamble Store in the 1950’s, and later as the village mailman. Johnny will surely be remembered as a new car salesman in various local Ford dealerships, especially Blissfield. He enjoyed fishing up North and in Canada, water skiing, and working in his garden on hot summer days. Johnny was an active man full of life, and all who knew him had enriched lives After enlisting in the Army during World War II, Johnny was set to join the fight until the discovery of a heart murmur sidelined him. He stayed active in the American Legion throughout his long and well lived life. In addition to his wife, Helen, Johnny was preceded in death by his parents, Anthony and Natalia (Geidroye) who was from Russia; brothers, Bill, Russ and George; sisters, Frances and Lillian; and son-in-law, Jerry Harpst. Johnny is survived by daughters, Bea (Pat) Delahunty of Adrian, and Brenda Osenko of Milan; grandchildren, Corey (Kerstin) Rider, Jason (Ruby) Rider, Brigid (Jay) Williams, Beth Delahunty; great-grandchildren, Kyle Rider, Kaden and Brady Rider and Conner Williams A private graveside service was held at Pleasant View Cemetery. Arrangements were entrusted to Wagley Funeral Home, Tagsold Chapel, Blissfield, where on line condolences and memories may be shared at www.WagleyFuneralHomes.com.

BLISSFIELD &#8211; Johnny R. Osenko, one of Blissfield&#8217;s oldest and brightest individuals passed peacefully into eternal life on Saturday evening, February 9, 2019, in his home of over 60 years. He was surrounded by both his loving daughters... View Obituary & Service Information

The family of Johnny R. Osenko created this Life Tributes page to make it easy to share your memories.

BLISSFIELD – Johnny R. Osenko, one of Blissfield’s oldest and...

Send flowers to the Osenko family.