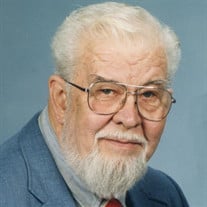 ADRIAN- John Paul Wooden, age 89 of Adrian, passed away on Saturday, October 12, 2019, at his home surrounded by family. He was born on May 5, 1930, in Winona, Minnesota to John and Seraphine (Gora) Wooden. After graduating from high school, John joined the Army and served our country during the Korean War where he was awarded a Bronze Star. On August 28, 1954, John married Mary Frances Walsh in Fountain, Minnesota. They shared almost 61 years together before her death on July 14, 2015. John was able to go on to college following his military service by using the GI bill. John was passionate about teaching and making sure others had the opportunity to further their education. He taught history at New Mexico State University, University of Oklahoma, Michigan College of Mining and Technology and the University of Michigan. John went on to be one of the founders of Washtenaw Community College where he was Dean of General Studies. John had many talents including woodworking, gardening and cooking for large groups of people. He was a member of St. Joseph’s church and ran the food pantry for the St. Vincent DePaul Society for many years with his wife Mary. A devoted family man known as “Papa John”, he always took the time to be involved with his children and grandchildren, including helping his grandson, Jack, win first place at a pinewood derby race. His wry sense of humor will be greatly missed. He is survived by his daughters, Charna Wooden of Georgia, Sarah (Fred) Gallagher of Saline; grandchildren, Carolyn and Thomas Wooden, and Jack Gallagher; and daughter-in-law, Elizabeth Wooden. John was preceded in death by his parents; wife, Mary Frances; son, Christopher; and brother, Kenneth Wooden. At John’s request, cremation will take place with no formal services at this time and arrangements have been entrusted to Wagley Funeral Home. In John’s memory, take the time to get involved and show others you care; give of your time and talents. The family would like to thank St. Joseph Mercy Hospital and Hospice of Lenawee. Online condolences and memories may be shared at www.WagleyFuneralHomes.com.

ADRIAN- John Paul Wooden, age 89 of Adrian, passed away on Saturday, October 12, 2019, at his home surrounded by family. He was born on May 5, 1930, in Winona, Minnesota to John and Seraphine (Gora) Wooden. After graduating from high school,... View Obituary & Service Information

The family of John Paul Wooden created this Life Tributes page to make it easy to share your memories.

Send flowers to the Wooden family.