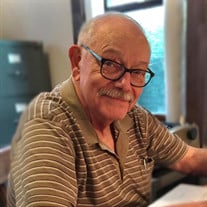 ADRIAN – John A. Weeks, 84, of Adrian passed away early Sunday morning, November 14, 2021, under the loving care Hospice of Lenawee. Born September 13, 1937, at Mercy Hospital in Toledo, Ohio to Henry and Helen Weeks. On July 2, 1960, he married Virginia “Ginny” Colway in Toledo, Ohio. They shared 61 years together of love and memories. John graduated from DeVilbiss High School in 1955 and received his undergraduate degree from Albion College in 1959. He went on to receive his Master’s and PhD in Modern British History from The Ohio State University. Once he completed his degrees, he started his career teaching history at West Liberty State College (now University) in Wheeling, West Virginia. John then went on to teach at Adrian College for 28 years. Throughout his career working with young adults, they had a significant impact on him, while at the same time he hoped to influence their lives. While at Adrian College he not only taught but was the Men’s and Women’s swim coach for 12 years, the football spotter and announcer for approximately 25 years. He also received the Bulldog Award, Professor of Excellence Award, and this past fall the AC Stewardship Award. John was a 51-year member of Civitan of Lenawee where he served as a member, Club Officer, Area and District Officer and Governor (2000-2001), Michigan District Foundation. Through his membership in Civitan he also was the Lenawee Special Olympics Chair for two years. He summered in Bay View, Michigan for over 50 years where he was active in the recreation program, stage manager for numerous plays and musicals. John was also a member of the choir and served as the Director of the Bay View Achieves for over 25 years. He was preceded in death by his parents and sister. John is survived by his loving wife Ginny, daughters Brenda Maloney, Deb (Rick) Mitchler, and his “Sweet Granddaughter”, Ashley. John was a long-time member of First United Methodist Church of Adrian. Memorial services will be at the church on Friday, November 26, 2021, at 11 a.m., with Pastor Eric Stone officiating. Visitation will be an hour before the service. At a later date, interment will occur in the Bay View Memorial Gardens. Arrangements have been entrusted to Wagley Funeral Home, Adrian, where online condolences and memories may be shared at www.WagleyFuneralHomes.com. The family would like to thank the staff at Hospice of Lenawee for the personalized care John received. In lieu of flowers, please consider a donation to the HOPE Community Center, Bay View Recreation Department (https://www.bayviewassociation.org/give-a-gift/) or Hospice of Lenawee. (https://www.hospiceoflenawee.org/donate.php)

The family of John A. Weeks created this Life Tributes page to make it easy to share your memories.

Send flowers to the Weeks family.